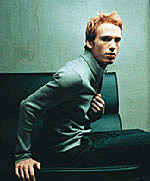 I didn't even realize that the club raid at Avalon happened DURING the Glenn Kotche & Teddy Thompson show.

GARRETT SHELTON, the director of marketing and A&R for the independent jazz label Sunnyside Records was at the club for an early evening concert featuring WILCO drummer GLENN KOTCHE and TEDDY THOMPSON performing for "subdued Wilco fans," when "40 cops appeared out of nowhere." Everyone seemed confused: "A couple of cops looked completely flummoxed," says Shelton. "They said it was a citywide narcotics crackdown, but they got the wrong crowd!" He added, "The head of the operation was glaring at the crowd from the stage while smoking a cigar."

That, and more about the whole "bust", in Tricia Romano's latest column.

And this from a comment on Teddy Thompson's MySpace page:

Just wanted to say you sounded great last night - before the mike was cut. Please accept my (unauthorized) apologies on behalf of the NYPD. That had to be the most ABSURD shut-down of a show ever! Well, at least the drama of the evening will ensure that your appearence there will not be forgotten any time soon. "Remember Teddy Thompson played Avalon the night it was shut down mid-show."
[Maybe the tongue-in-cheek comment about always wanting to be an '80s club kid had something to do with it. :)] Seriously, I hope you receive official apologies from the venue and the NYPD. Will look forward to your next un-interrupted show in NYC.

Glenn got to play his whole set though.