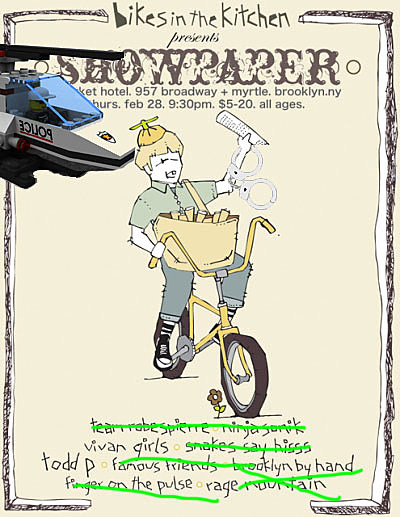 Last night around 11:15 pm, I got to the Market Hotel--a/k/a the 20 day-old all-ages space where Todd P and other DIY-minded folks have been booking rad shows, the same tremendously rad space where I snapped these nifty No Age pics couple Mondays ago--only to pull open its metal door and find the lights on, total silence, and a NYPD officer standing at the top of the stairs. Then, a frustrated bark: "We're closed."

It was supposed to be a four-band benefit for Showpaper, topped off by Ninjasonik and Team Robespierre. But according to a couple kids who'd already been inside (one of whom was Crowd-Surf Girl--her name turns out to be Stephanie), the bill didn't make it past the Vivian Girls before the po-po showed.

No official word yet what this means for the stellar line-ups scheduled for the next two nights (High Places/Lucky Dragons tonight; Ghengis Tron, Aa, Ponytail, Shooting Spires on Saturday), but as of this moment all the dates are still on the Market Hotel MySpace page. [Village Voice]

I just talked to someone else who was there when it happened. They said it got shut down around 10:30 and there were around 100 people there. The Vivian Girls had finished playing and there was a DJ on at the time. Scary part: supposedly anyone with a Showpaper shirt was told to stand against the wall. Everyone else was allowed to leave. They don't think anybody was arrested, but tickets were issued. It all may have had to do with someone drinking on the street. Lots of rumors (including the show possibly starting back up at 1am?) and not many exact details at this point. 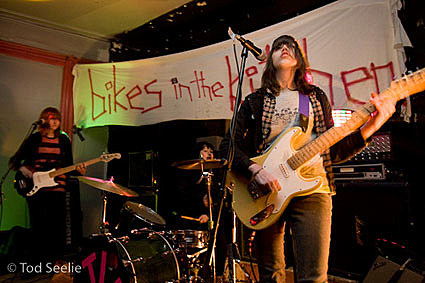 Just last week a much more packed Black Dice show happened at the Market Hotel with no problems at all.