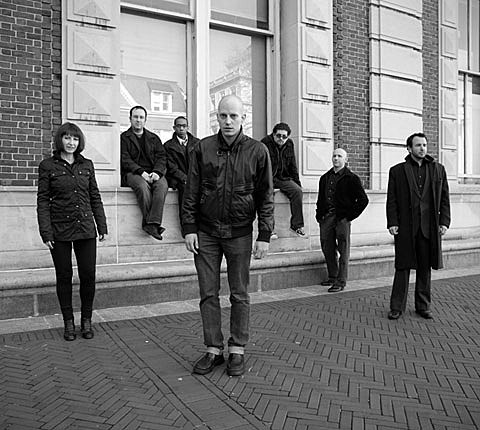 The final show of the monthly Archipelago music series at Galapagos will take place Friday, May 21st (tonight). Singer/composer Corey Dargel is using the show as a release party for his new record, Someone Will Take Care of Me, out May 25th on New Amesterdam. That double album includes two song cycles, Thirteen Near-Death Experiences and Removable Parts, which he'll be performing songs from at the show with the help of International Contemporary Ensemble (ICE), pianist Kathleen Supove and drummer David T Little. The two songs are from the record (one from each work).

Also performing at the concert will be American Contemporary Music Ensemble (ACME) and singer Craig Wedren (from Shudder to Think), who will be debuting songs by composer Jefferson Friedman. The three have worked together in the past - videos from their performance of Friedman's song cycle On in Love at Miller Theatre in 2009 are posted below.

Friends-
please join me on Fri, May 21 for a rare and awesome evening of new music that will blow minds.
For the last year or so, composer Jefferson Friedman and I have been collaborating on a song cycle which fuses/abuses classical and vocal music, essentially smashing both traditions wide open and shooting the whole thing on an orchestral rocket to the moon. I'll be singing with ACME (the American Contemporary Music Ensemble), and we'll be premiering 3 new pieces in addition to the 3 we debuted last year.
Hope to see you listening.
Thanks,
Craig

Tickets are on sale ($5 off with code "NEWAM"). BrooklynVegan also has a pair of tickets to give away. Details on the give-away, videos and more info on the show are below...

Archipelago concludes with a special closing night event featuring an ambitious mix of stellar ensembles and performers. Known for its definitive takes on the masterpieces of the 20th and 21st century, the American Contemporary Music Ensemble (ACME) actively seeks to redefine chamber music's role in a new century. Joining ACME on stage will be Craig Wedren, a composer/vocalist best known for his work with the legendary math rock/post-hardcore outfit, Shudder to Think - and his impressive body of film music work (High Art, Velvet Goldmine). The show will also feature composer/vocalist Corey Dargel, who will use the evening to explore themes of loss and love in a special New Amsterdam dual record release event. Regarding Dargel's idiosyncratic chamber pop, the New York Times had this to say: "Dargel sings in a modest, sweet-toned, conversational way, and writes songs whose lyrics and melodies are at once wistful and wry, tender and irreverent... giving voice to the lives and relationships of his subjects." Both records are highly-acclaimed, theatrical pop-concept albums: for the semi-staged Removable Parts, Corey tells the twisted story of voluntary amputees with the help of renowned pianist Kathleen Supové, while the International Contemporary Ensemble (ICE) will join Corey for a selections from Thirteen Near-Death Experiences, a charmingly demented art-pop song cycle about hypochondria. Lauded for their "vigorous, richly detailed performances", ICE brings nuance and precision to Dargel's first fully-acoustic large-scale project.

On In Love: "Refuse To Die" Performed by Craig Wedren and ACME 2/12/09 Miller Theater NYC

On In Love: "Tarrying" Performed by Craig Wedren and ACME 2/12/09 Miller Theater NYC

Pocket (featuring Craig Wedren): "Someone to Run Away From" from Skyrocket Studio on Vimeo.

TO WIN A PAIR OF TICKETS TO GALAPAGOS ON FRIDAY (5/21): E-mail BVCONTESTS@HOTMAIL.COM (subject: Archipelago). Include your first and last name. One winner will be picked randomly and contacted ASAP.