Four weeks ago Arctic Monkeys still held the #1 spot on the UK album charts. They were knocked to #2 on Feb. 26th by Jack Johnson. Jack was knocked to #2 on March 5th by Corinne Bailey Rae. Corinne earned her #1 spot by selling over 100,000 albums in the first week. Currently she's #2, having been knocked down one spot by Pink Floyd's David Gilmour. Last night (March 13) she played between the Grates & Guillemots @ Mercury Lounge in NYC as part of the unofficial pre-SXSW festivities going on in our city right now. I'm not a huge fan of her songs, but her voice and band made it a show well worth showing up to. 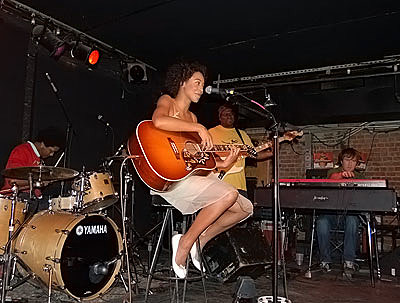 Her entire Spring UK tour is sold out. SXSW has an MP3.