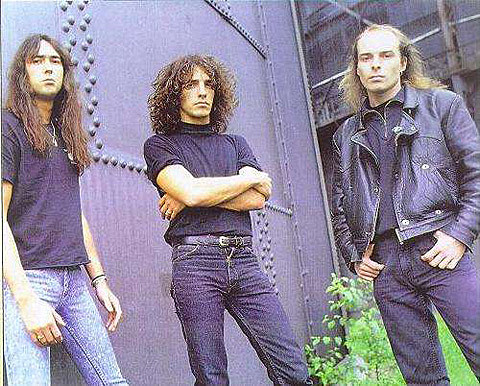 The Swiss thrash trio Coroner were originally road crew for Celtic Frost. They eventually formed their own group, recording their demo Death Cult in 1986 with Tom G. Warrior of Celtic Frost on vocals. Their first full-length album R.I.P., released in 1987, featured bass player Ron Broder on vocals and he assumed the role for the rest of the group's existence.

The group released several albums through to 1993, ending with a greatest hits collection, Coroner, in 1995. Lack of media exposure brought this band to disbanding in 1995 -- and to their farewell tour consequent to their self-titled album in January and February 1996. -[Wiki]

Coroner will return from the grave to play Maryland Death Fest 2011, alongside newly announced bands Nuclear Assault (who played NYC recently), Death Breath, the reactivated Doom, Oak (who have a new LP), and Visceral Disgorge. The full band listing is below.

In other notable festival news, Roadburn 2011 is shaping up to be pretty impressive with recent additions of The Kilimanjaro Darkjazz Ensemble, Zoroaster, Wardruna, Acid King, Naam, The Atomic Bitchwax, Quest for Fire, and...

Swedish doom metal legends Candlemass have been confirmed for Roadburn Festival 2011. Originally scheduled to celebrate 25 years of doom at this year's Roadburn in April, Candlemass ended up stuck in Stockholm due to logistic complications arising from the volcanic eruption in Iceland. Candlemass is now scheduled to play on Saturday, April 16, 2011 at the 013 venue, Tilburg, Holland. Starting at 15.45, Candlemass will perform a very special 2-hour set, which will include "Epicus Doomicus Metallicus" in its entirety; featuring original vocalist Johan Längquist.

Naam will play Bruar Falls in Brooklyn on 10/29 with Mutant Supremacy, Total Social Suicide, Pilgrim Concussion, Bezoar, and So Hideous My Love.

Current Roadburn & MDF IX lineups, as well as some video of some of those bands, are below.

NEUROSIS "Through Silver In Blood" Roadburn 2009