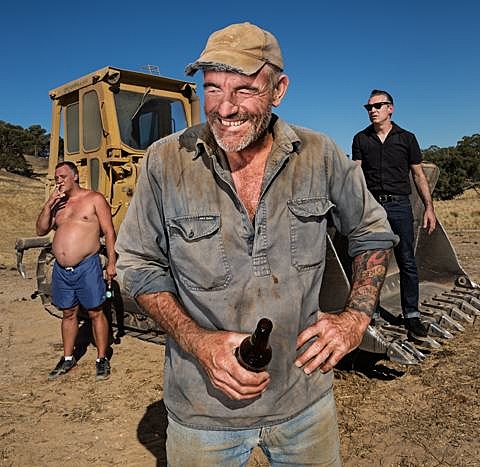 As mentioned, Australia's Cosmic Psychos are celebrating their 30th anniversary this year and have just started their first North American tour in ages which includes two stops in NYC next weekend at Cake Shop on September 20 & 21. Friday (9/20) is with Pampers and Call of the Wild; Saturday (9/21) is with M.O.T.O. and Degreaser. No advance tickets.

On this tour the band are also screening their documentary, Blokes You Can Trust, and the NYC screenings have been announced since we last posted. They happen at two different venues in Williamsburg: the 9/20 screening happens at Over the Eight (the old Royal Oak space) at 8 PM; on 9/21 the screening will be at Videology at 6 PM. Tickets for either screening are $5. Trailer for the film is below.

After the NYC shows, Cosmic Psychos will head to Memphis for Goner Fest. The fest's namesake, Goner Records, will reissue the band's first three albums: Down On The Farm (1985), Cosmic Psychos (1987), Go The Hack (1989). CDs will be available next week (9/17) and vinyl comes out October 1. You can stream "Lost Cause" off Go the Hack below.