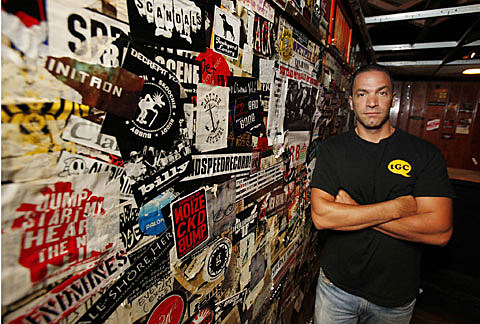 Stickers covering the wall tell some of the story.

Bold letters and designs shout out names such as Spredhaus, All Eyes West and Dinosaur Eyelids -- as well as dozens of other bands who performed there.

"People have told me, 'Don't take down that wall,' " said Mike Barrood, new owner of the Court Tavern, the legendary New Brunswick bar and music venue that closed in January.

Barrood, 33, is renovating the place and hopes to open within a month.

"A lot of the old customers called and offered to help and work for nothing," he said.

"Actually, people don't want it fixed up," he said of patrons who affectionately remember the scruffy-grungy atmosphere at the Church Street venue that gave bands their start.

"I celebrated my 21st birthday there," said Horowitz, now with the Gaslight Anthem, a New Brunswick-based group that tours internationally. The band's first show was at the Court Tavern. [NJ.com]

The Gaslight Anthem's song "The Diamond Church Street Choir" is about the Court Tavern. They play Webster Hall tonight, and talk about the club and its booker Andy Diamond, in the video clip below...