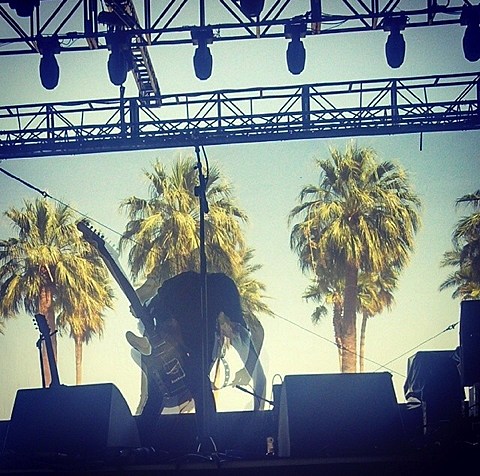 Australian psychedelic folk rocker Courtney Barnett finally gave her double EP, A Sea of Split Peas, a US release today (4/15) via Mom + Pop. She's currently in the US for Coachella, which she played this past weekend and will play again this coming weekend, and she's also got a few other dates here surrounding the festival. After it ends, she'll play a Connecticut show on 4/22 and then hit NYC's Other Music on April 23 for an in-store to celebrate the US release of her album. The only way to gain entry to that show is to order the album from Other Music, and space is very limited.

Courtney will be back in North America for a full tour later in the year which includes NYC shows happening on June 14 at Music Hall of Williamsburg (part of Northside Festival) and June 17 at Bowery Ballroom. Both of those shows are with Benjamin Booker, and tickets are still available. Updated dates are listed below.

Courtney also just debuted a new song, "Depreston," in her NPR Tiny Desk Concert which premiered this week. Not long before that, she covered The Lemonheads' "Bein' Around" during an acoustic session at the Brooklyn waterfront. You can videos of both of those, with the list of dates, below...