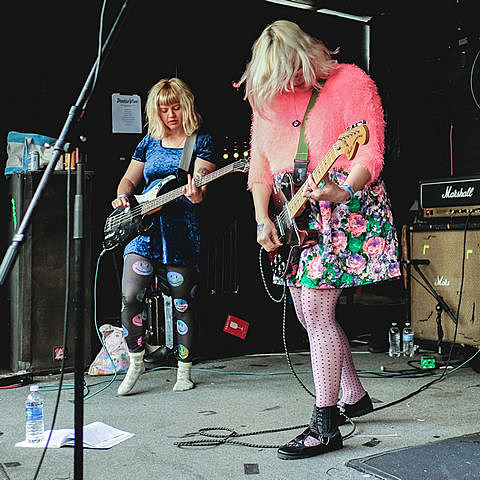 Courtney Love, famously married to Kurt Cobain, uploaded a new song to YouTube entitled "Wedding Day", the flipside to her new single. You can listen to that below, and to the other song on the release, "You Know My Name", HERE.

Meanwhile, the Hole reunion may still not happen, but drummer Patty Schemel is keeping busy with her band Upset who have added a 2nd Brooklyn show to their previously announced set of dates. In addition to May 9 at Death By Audio (with Aye Nako & Palehound), Upset will play May 10 at Baby's All Right with Worriers and an Amy Klein of Hilly Eye DJ Set. It's billed as a 'Don Giovanni Late Night' and tickets are on sale.

Worriers are also on the bill of The Fest which recently added Mineral, Paint It Black, Iron Chic, The City on Film, Treasure Fleet, Sundials, State Faults, PUP, and more to its lineup. And they have another NYC show in July.

Upset played a show at the Church of York in LA last night with Bleeding Rainbow (4/30). The new LA venue, started by ex-BrooklynVegan photographer Graeme Flegenheimer, is currently open but fighting for survival.

Updated Upset dates are listed with the new Courtney Love song below...