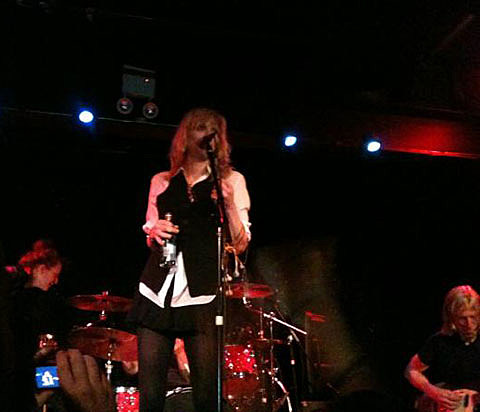 Hole reunites after 15 yrs. at the after party for the release of rockumentary Hit So Hard. based on drummer Patty Schemel who played with past band members Melissa Auf der Maur, Eric Erlandson and Courtney Love as they hit the stage at Public Assembly in Williamsburg, BK. April 14, 2012, 15 Years after last playing music together.

Courtney jumps on stage to play Miss World after waiting for Eric to tune her guitar and Patty to find her a strap.

Spoiler alert:
Courtney jumps back on stage for Over The Edge

You'll remember that the event was advertised as 3/4 of 90's Hole lineup (not to be confused with current day Hole), and I don't think they even knew if Courtney would show up and play a song with them. Watch it happen, Courtney giving a shout-out to the Cribs who were playing Music Hall of Williamsburg next door included, in the video below...

--
Hole Reunion after 15yrs. Video by their superfan Greg Frederick (via)

PREVIOUSLY Patty Schemel movie opening in theaters; afterparty in Brooklyn (with 3/4 of Hole)