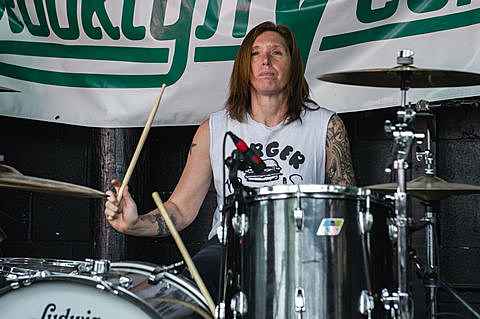 While Courtney Love has been spending time lately looking for missing Malaysia Airlines flight MH370, she's also been plotting the return of the mid-'90s line-up of Hole. Courtney told The Quietus that she and Melissa Auf Der Maur, Eric Erlandson and Patty Schemel have put aside their differences and are working on new material and will be touring.

"I started playing with Patty and Melissa and Eric, just to see how that was," Love told The Quietus. "We already played like three or four times in the last week." Courtney hinted this was happening back in December when she posted a photo of her and Erlandson together on Facebook, saying "2014 going to be a very interesting year."

Patty Schemel just wrapped up a few dates with her current group Upset, including one at one of our SXSW day parties. While no North American tour dates have been announced yet, the reformed Hole will play a string of UK dates in May and those are listed below.