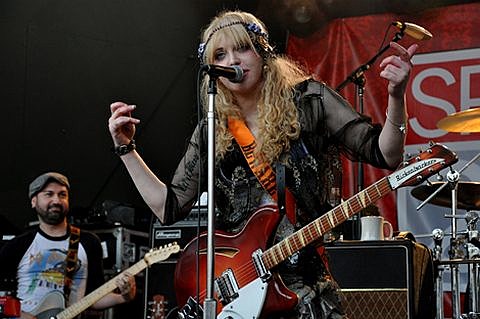 A little while back, we mentioned that Courtney Love would be doing some Northeast shows with Starred this summer. That run of dates has been expanding into a much larger North American tour. You can check out the updated list of dates below.

The NYC-area dates on the tour happen on 6/26 at Warsaw in Brooklyn, 6/27 at the Capitol Theatre in Port Chester, 6/28 at Stone Pony Summer Stage in Asbury Park, and 6/29 at The Paramount in Huntington, NY. When we last spoke, it wasn't certain if Starred were on the Capitol Theatre show too, but it's since been confirmed that they are. Tickets for the Cap show and tickets for the other three NYC-area dates are still available.

In related news, Consequence of Sound points to an interview with Bust where Courtney says she's working on a new solo album, which is tentatively titled Died Blonde. Maybe we'll hear some of the new material on this tour? What we can assume is that we probably won't be hearing much Hole material though:

"I've been offered money to do an oldies [tour] sort of thing," she explains. "It's just not me." She's not averse to performing some of Hole's greatest hits, though. "I don't mind making a crowd happy. I still really like 'Malibu.' I play 'Miss World' sometimes. I don't like 'Doll Parts' anymore; it's just a simple song, like three chords, and it kind of drives me nuts." One thing that won't ever happen, she says, is a Hole reunion, "for reasons that I cannot even begin to get into," but then she does get into them, at length. What it comes down to, it seems, is that she has some serious beef with Hole guitarist Eric Erlandson.

The demand for the "oldies" is partially why Courtney is choosing to tour under her own name and not as Hole, which she did in support of her 2010 album, Nobody's Daughter, which was released as Hole but featured no other original members besides Courtney. That Bust article also mentions that Courtney is currently looking for a new bassist "in the style of Melissa Auf der Maur" on Craigslist, but not having much luck. "There's just not a lot of chick bass players," she says.

In other news, Courtney Love tweeted at Amanda Bynes, "pull it together dude," to which Amanda responded (but since deleted), "Courtney Love is the ugliest woman I've ever seen, To be mentioned by her at all makes me and all my friends laugh!"

Updated dates are listed, along with a live video from 2012, below...