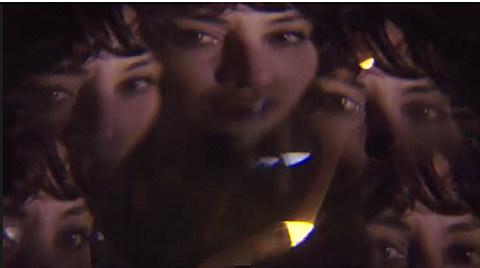 Brooklyn duo Courtship Ritual have released a video for "Ancient Drip" which was featured on last year's underrated PITH LP. (It just barely missed my Best of 2014 list.) Directed by Anthony Sylvester, it puts a dark, kaleidoscopic face to the song and you can watch that below. That song is also featured on a new GODMODE compilation cassette titled American Music that also features a unreleased Courtship Ritual track ("Gris Gris"), as well as songs from YVETTE, Motion Studies, Shamir and more. The cassette's out March 31. Tracklist is below.

Courtship Ritual have a few NYC shows coming up: March 28 at Shea Stadium with Phedre, Doomsquad and VOTIIV; then April 3 at Palisades with UK band Vision Fortune; and May 5 at Union Pool with Weeknight and Aircrafting.

GODMODE American Music - tracklist:
SIDE A
Soft Lit - I Can't Help It
Hand of God - Hand of God
Fitness - You Go Where I Put You
Malory - Dah
YVETTE - I Don't Need Anything From Anybody
Fasano - You Believed It
Courtship Ritual - Ancient Drip
Shraf - With Every Heartbeat
Puppy Cops - Heavy Bug (Excerpt)
Motion Studies - In Our Days
The Present - Baby

SIDE B
Excepter - Gowanus Moonset
Breeding Program - No Time For 69
Montreal Sex Machine - Loose In The Zone
Kill Alters - A.09
Fissures - Elemental Shit Is Stupid (Deep Cavity Edit)
Courtship Ritual - Gris Gris
Isn't Ours - Hey This Is DJ Assault Give Me A Call Back
Manikr - Side A (Excerpt)
Shamir - I Know It's A Good Thing (Negative Supply Remix)