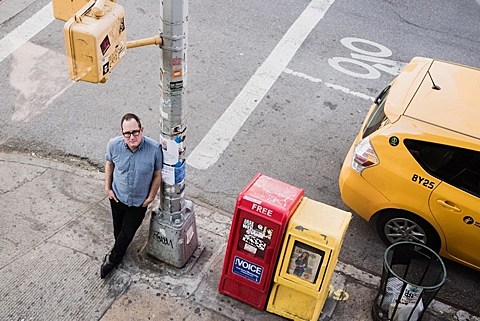 Hold Steady frontman Craig Finn has been on tour with Heartless Bastards (they played NYC earlier this week), and today he announced his second solo album. It follows 2012's Clear Heart Full Eyes on Vagrant. This one's called Faith In The Future, will come out on September 11 via new label home Partisan, and first single "Newmyer's Roof" is out now. Not that Craig hasn't always sounded influenced by Springsteen, but this one especially sounds inspired by Bruce's mid-'80s era. Here's what Craig told NPR about the song:

Just less than a year later came the terrible events of September 11, 2001. I was working at an office in Union Square and my friend and boss Chris Newmyer suggested we come to his apartment on 2nd Avenue in the East Village. We could see the towers from the roof he said.

We went up there and saw the towers burn and then collapse. At some point he suggested we get some beer. I didn't know what to feel that day, most of us had no emotion to access. So we got some beer, and drank them while watching the World Trade Center go down. It sounds detached now, but at the time it made sense on a day when nothing else made sense. I spent some years after that in darkness.

There was a girl in the 33rd floor of one of the towers that was a receptionist at an investment bank. She went to work that day and when the plane hit they asked her to stay where she was. They said it was safest. She decided against that and walked out of the towers and, like the rest of us, did her best to get on with her life.

Some years later I went to a birthday party. I talked to this girl. We talked all night. We fell in love and are still together. I came out of the darkness. I'm glad she didn't do what they told her to do.

Listen below, and you can get an instant download of it, plus four outtakes, if you pre-order through PledgeMusic.