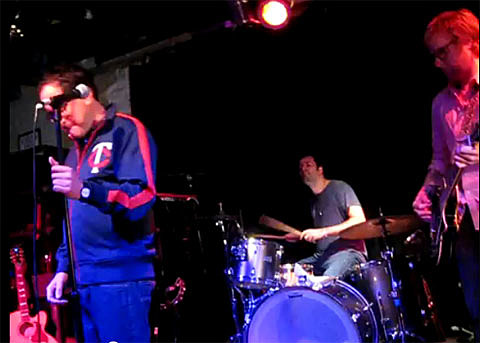 Though Brian Fallon cancelled, there was still plenty of talent to go around at last night's 1st-of-three BrooklynVegan-sponsored Replacements tribute shows at Bowery Electric. The Hold Steady's Craig Finn & Tad Kubler performed a cover of "Within Your Reach" which you can watch below (courtesy of jukeboxgraduate) along with a video of the encore performance of "Bastards of Young" that had Craig Finn, Titus Andronicus's Patrick Stickles, Jesse Malin, Tommy Ramone and others all on stage together.

If you missed the show, you have two more chances to experience it tonight (11/17). The early show is sold out though, but tickets are still available for the late one. Tonight's guests will not include Craig, but you will get:

Meanwhile Craig Finn has announced a solo tour in support of his upcoming album which he also posted a song from. No NYC dates for now, but you can see all the other dates, listen to his new song and watch the videos from the Replacements event, below...