DOWNLOAD: The Crayon Fields - All the Pleasures of the World (MP3) 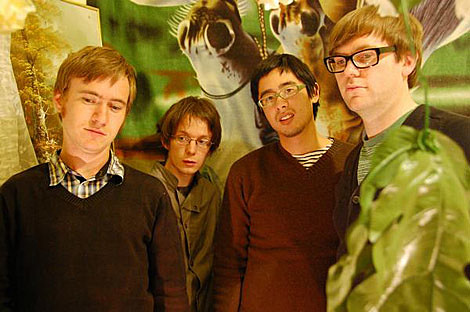 One of my favorite albums of 2009 was the baroque pop gem All the Pleasures of the World from Melbourne, Australia's Crayon Fields. It's ten swoony epics in miniature, recalling The Zombies and The Left Banke without ever directly ripping them off. You can download the album's title track at the top of this post. The band are making their first trip to the U.S. to play SXSW but then are heading to New York for four shows: Bruar Falls on March 23, The Sycamore on March 24, The Bell House on March 25, and Pianos on March 26.

The Bruar Falls show is especially noteworthy and pretty unmissable in my opinion. Also playing is singer Kath Bloom who is something of a cult hero in folk circles. You might know her song "Come Here" which was used prominently in Richard Linklater's film Before Sunrise. (Crayon Fields covered the song as a b-side last year too.) Chapter Music, which is Crayon Fields' label, has been a champion of her for some time, reissuing much of her impossible-to-find '70s/'80s catalog, as well as new material, including 2008's Terror, her first official new album since 1984.

Last year, Chapter Music released Loving Takes This Course, a two-CD set that featured one disc of covers by the likes of Devendra Banhart, Bill Callahan and The Dodos, and a second disc of the original Kath Bloom songs that were covered on the first disc. Kath's brand new album, Thin Thin Line, which got an 8.0 on Pitchfork. She doesn't play very many shows and I'd imagine her alone would be enough to get people out to the show.

But there's more. Also on the Bruar Falls bill is Australian indie legend Richard Davies, who in the early '90s fronted The Moles (get their essential, out-of-print debut, Untune the Sky, any way you can) and then went on to form chamber pop group Cardinal with Eric Matthews (their 1994 debut is equally amazing ), and then a three album solo career that ended when he gave up rock for a law degree in 2000. But Davies has become active in music again as of last year. First came Cosmos, a collaboration with uber-prolific Robert Pollard, that is worth picking up. This year will see a new Davies solo record and the long-rumored second Cardinal album, both of which will be released by Chapter Music.

Fouth performer on the Bruar Falls line-up is Guy Blackman, who writes "sensitive piano ballads that aim to make straight white men feel slightly uncomfortable by confronting them with my renegade sexuality" and who has also run Chapter Music since starting the label in 1992. Chapter Music releases a lot of great stuff: Pikelett, The Twerps and Tenniscoats among them.

The Bell House show The Crayon Fields are playing is the second-annual Aussie BBQ that features 12 (!) bands from down under: The Chevelles, Love of Diagrams, Pets with Pets, Paul Dempsey, Sherlock's Daughter, Children Collide, Oh Mercy, City Riots, Beaches, Bliss N Eso, and The Goons of Doom. As the name implies, there will also be Australian BBQ and beer. Sounds like fun. Maybe you went last year?

All Crayon Fields tour dates, plus three of their music videos are below.