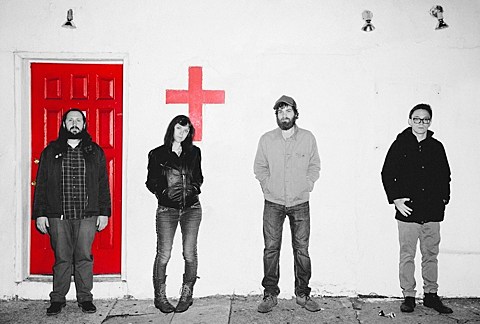 When you hear a band name like Creepoid and hear that they're on No Idea Records, you probably think you know what you're getting: a punk band. But this Philly band are anything but. Their self-titled sophomore LP (due out on 3/4) has more in common with '90s slowcore bands like Red House Painters or Low than it does with most of their labelmates. They can still get intense, but in a different way. Clean guitars and dreamy vocals make up most of the album, pulling you in via entrancement rather than full-throttle attack. And though they can pile on the distortion in some parts (like the psychedelic-sludge drone at the end of "Tired Eyes"), it's more of a rare secret weapon than their main tool to fall back on.

They don't pile on the distortion at all on the new record's single, "Sunday," which is all strummy acoustic guitars and a twangy electric lead. The black and white video for that song makes its premiere in this post, and you can watch it below.

Creepoid also have a number of dates coming up, including SXSW and two NYC shows. The first is the NYC stop of the Graveface Roadshow at Shea Stadium on February 17, which we already knew The Casket Girls were playing, and since we last spoke, The Stargazer Lillies and Dreamend were added too. Tickets for that show are on sale now. They also open the NYC stop of the Whores / Fight Amp tour, which happens on March 28 at Saint Vitus with No Way. Tickets for that show are still available.