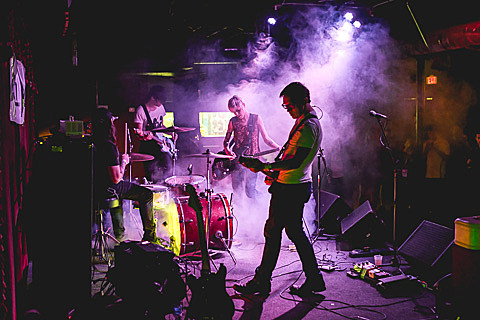 Philly shoegazers Creepoid, who recently played a trippy set at BV-SXSW (and no longer have any members in jail), are going on a US tour this spring before heading to Europe with Pity Sex (who played that same BV-SXSW party). The tour begins in their hometown of Philly, and wraps up in Denton, TX (no NYC show). All dates are listed below.

Speaking of Pity Sex, the openers were announced for their upcoming free NYC show happening April 17 at Brooklyn Night Bazaar. They'll be joined by Foxes In Fiction, John Galm (Snowing, Street Smart Cyclist, Slow Warm Death, etc) and The Spirit of the Beehive. Pity Sex's only other dates before the European tour are a hometown show with Cloakroom and Congress, and a Chicago show with Whirr, Adventures and The Weaks.