Creepoid at MHOW in May (more by Caroline Harrison) 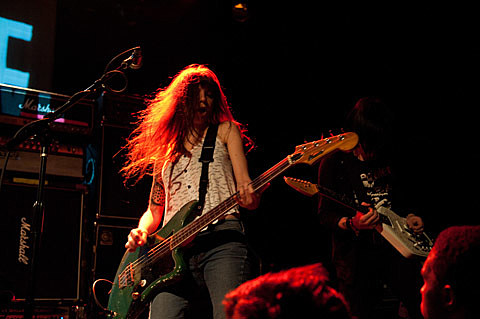 Philly's Creepoid have had a very busy year so far. They put out a full length and an EP, both of which did justice to the shoegaze and slowcore bands of the '90s. They also did a ton of touring, and won us over at their NYC show with Dinosaur Jr. Now even more shows are on the horizon, as they're one of their many bands who will be in NYC for CMJ. Here's what their schedule looks like as of now:

They've also got a Philly show in the middle of CMJ, and right after CMJ they play Union Pool on 10/26 with Drone Ranger ($8 at the door) and then open for Geoff Rickly's band No Devotion at Glasslands on 10/28 with Ricky Eat Acid and Black Clouds. Tickets for that show are still available. Full list of tour dates (including The Fest) below.

There's other good bands to catch on all of those bills, like Protomartyr (who also play a BV party) and Slingshot Dakota. Another one that's not to miss that we haven't highlighted before is White Lighters, who plays with Creepoid at the Graveface/Noisey Ghost showcase. White Lighters is the solo project of Nothing's Brandon Setta, and while he keeps things acoustic for this project, the songwriting style and shoegazy tones that he uses in Nothing are prevalent here too. His newest album, As Far As You Can As Fast As You Can, came out earlier this year and can be streamed below.

Streams of Creepoid's album and EP, a video, and their list of dates, also below...