Simon Bonney of Crime & the City Solution in 'Wings of Desire' 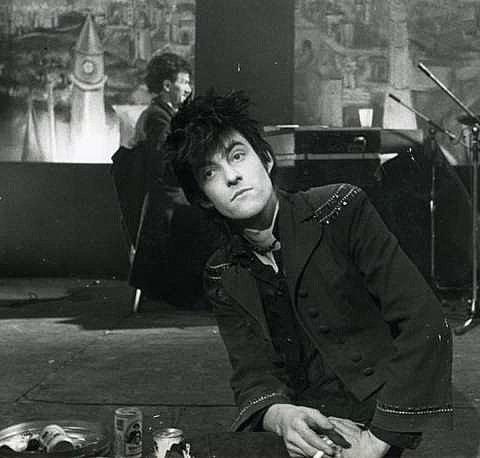 Legendary Australian band Crime & the City Solution broke up in 1990 following their fourth album, Paradise Discotheque. While known for their appearance in Wim Wenders' 1987 classic Wings of Desire (video below), the band have been overshadowed by The Birthday Party (many of whom ended up in C&CS), Nick Cave & the Bad Seeds and Swell Maps, but they're an important part of the '80s dark-tinged post punk scene and have gained a cult following over the last 20 years. Both Coliseum and Young Widow cited them as big influences in interviews with BV.

Members Epic Soundtracks and Rowland S. Howard passed away in 1997 and 2009, respectively, but frontman Simon Bonney (who now lives in Detroit) announced last year that he's forming a new version of the band including violinist Bronwyn Adams and guitarist Alexander Hacke (also of Einstürzende Neubauten) of previous incarnations, plus Jim White of Dirty Three, singer/artist (and Hacke's wife) Danielle de Picciotto, David Eugene Edwards of the 16 Horsepower/Woven Hand, as well as Troy Gregory and Matthew Smith. This new Crime and the City Solution have recorded a new album, American Twilight, which will be out in early 2013 via Mute Records. Audiences will get to hear some of the new record's songs live when Crime & the City Solution go out on tour this fall, including an NYC stop at Music Hall of Williamsburg on October 22. Tickets to the MHOW show go on sale Friday, August 3 at noon with an AmEx presale beginning Wednesday (8/1) at noon. All dates are listed below.

The tour will also feature lighting and projections from de Picciotto as well as songs from throughout Crime & the City Solution's career. If you're unfamiliar with the band, a new compilation titled An Introduction To... Crime & the City Solution / A History Of Crime - Berlin 1987 - 1991 comes out on Mute Records on September 24 and, as the title suggests, covers the later period of the band when they were located in Berlin. You can also get most the band's albums digitally (including via Spotify). 1986' Room Full of Lights and 1990's Paradise Discotheque are particularly good, but I'm also a fan of 1988's Shine. If you're a fan of Nick Cave or the gloomier side of the Bunnymen (or Liars or anything on Sacred Bones) you're missing out if you've never dug into Crime & the City Solution.

A few videos are below along with a list of all Crime & the City Solution tour dates...

"The Dolphins & the Sharks"