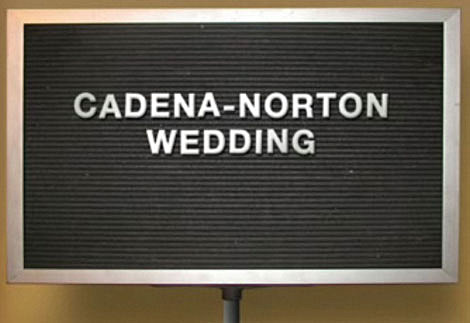 As we pointed out, Them Crooked Vultures were the musical guest on SNL last Saturday (two nights before they played Roseland Ballroom as part of a short tour). What we haven't mentioned is the skit that Vultures drummer Dave Grohl also participated in during the course of the Superbowl-eve show. I'm talking about the Fred Armisen-penned ode to hardcore set at a wedding with Bill Hader and Ashton Kutcher rounding out a four piece Fred Armisen-as-dad-of-the-bride band that proceeded to destroy everything in sight.

What people may not have noticed at the time was how elaborate an homage to 80s hardcore the skit was. Not only did the sketch hilariously caricature and encapsulate the anti-authoritarian, anti-meathead-letterman mentality the bands of that era railed against, but the wedding party's name "Cadena - Norton" is, presumably, a shout out to Black Flag's Dez Cadena and Husker Du's Greg Norton. The band was named Crisis of Conformity (Earth Crisis, Corrosion of Conformity). They broke up in 1983 (just like Minor Threat). Its members are also a serious tip of the hat to that 80s era scene. The skit's line-up featured Steve (Steve Hansgen of Minor Threat), Greg (Greg Ginn of Black Flag) (or maybe Greg Norton) (or was it Greg Hetson of the Circle Jerks), Lyle (Lyle Preslar of Minor Threat, Samhain), and Ian (Ian MacKaye of Minor Threat, Fugazi, Egg Hunt). Such a dense homage in such a short set could only have spawned from the mind of Fred Armisen (whose own credits also include Trenchmouth). However, theatrically, the skit wasn't without it's minor faults. As Tom Scharpling succinctly pointed out in a recent tweet, "Remember when hardcore guitarists acted like they were in Warrant? Aston Koocher does." Check out the video with the full lyrics below...

Crisis of Conformity
Lyrics for "Fist Fight" by Fred Armisen

(Spoken, Fred)
I guess my mind's all messed up
But isn't that a result of going to your schools being a part of your system following your orders

(Dave-his mic dropped out for a few lines, then Ashton gave him his )
I guess you want me to have 2.5 children and a white picket fence I have a better idea. Why don't I kick in your windows with my boots

(Fred)
You hear that Alexander Haig? You getting all that Ed Meese?