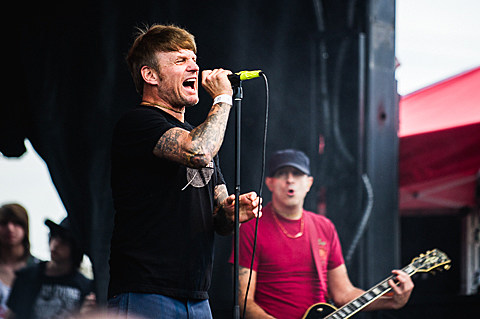 NYC crossover vets Cro-Mags have a few local-ish appearances this week and next. First, members John Joseph and Mackie will team with Bad Brains members Darryl Jennifer and Dr. Know to perform Bad Brains material with other special guests at Bowery Electric on Thursday (9/25) (like John and Bad Brains members did last month at Afropunk). The show is benefit for The Children's Tumor Foundation. "They send kids to camp suffering from a deadly cancer called NF." Another veteran NYC crossover band, Subzero, and The Wilding Incident (featuring Sacha Jenkins who's in White Mandingos with Darryl of Bad Brains) are opening, and tickets are on sale now.

Then, this weekend Cro-Mags will team with Agnostic Front, Ignite, Sick of It All, a Pantera cover band and more at East Coast Tsunami in Reading, PA. After that, it's off to Asbury Park, NJ for a show at Asbury Lanes on October 2 with Ensign, Real Cops, White Collar Crime LLC and School Drugs (tickets on sale), and finally they'll be back home in NYC for their previously discussed Saint Vitus (10/3) show with Heavy Chains. Since we last spoke, The Wilding Incident were added to that one as well, as were Ache. Tickets for Vitus are still available.

Watch a video of John Joseph and Bad Brains at Afropunk 2014 below...