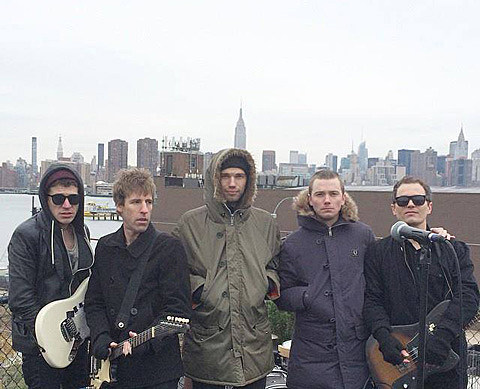 As mentioned, Brandon from Crocodiles will be DJing tonight at Baby's All Right as part of Kanine Records' holiday party which is free with RSVP. Brandon will also be playing at Baby's tonight too as part of Flowers of Evil which also features members of A Place To Bury Strangers, SISU, and Young Boys. Despite the makeup of the band being all from groups you could get away with calling JAMC-esque, Crocs says Flowers of Evil are "probably not what you'd expect it to be." They're the final band of the evening, preceded by Beverly, Public Access TV and Jamaica Queens. DJs (which include Kip from TPOBPAH, Lio from Kanine, and me) start at 7 PM and bands begin at 8 PM.

Crocodiles, meanwhile, will say farewell to the soon-to-close Glasslands on Sunday (12/14) with Cassie Ramone, Birds of Maya offshoot Spacin' and Brandon's wife Dee Dee of Dum Dum Girls on DJ duty. Tickets for that are still available.

And lastly, Charles from Crocodiles and WARTIME gives us his Top 10 of 2014, which is a list of shows he saw. Check that out below...

PINS at Point Ephémère, Paris France
"Embodying the heart and soul of Manchester. Salacious machine music in lace and lipstick. Half tranquil light, half tempestuous darkness."

SHANNON & THE CLAMS at Nuit Sonores, Lyon France
"Stiff but sexy, unapologetic, and riotously soulful. I had been transported back to a house party in Oakland circa 2008."

DIRTY BEACHES at Plisskën Festival, Athens Greece
"I've seen him perform so many times but this one felt like the culmination of his intense body of work. He was dancing on a tight rope on this particular evening, deranged but somehow still grasping an air of serenity."

DANIEL AVERY at Nuit Sonores, Lyon France
"I was higher than a giraffe's pussy when Daniel came out and delivered his bulldozer of analogue artistry."

EDWYN COLLINS at Rough Trade West, London UK
"A sunny day in London, down Portobello Road with Edwyn's beautiful songs rising up through the market swell. He even played "Make Me Smile," my personal favourite from his solo material."

GÄY at Brudenell Social Club, Leeds UK
"The madcap genius of these Denmark darlings was in full effect that night. Let's not forget that Brudenell is an incredible club to witness live music in."

FLOWERS OF EVIL at The Loft, Brooklyn NY
"A supreme force to be witnessed. Broken glass and bodies flailing, all bouncing along to sinister weirdo music."

ESG at KOKO, London UK
"The girls, and boy of ESG made the floors jiggle and walls quiver!"

JAIIL at Churchills, Miami FL
"The freaks came flocking out, and perhaps freaks can always be found at Churchills, but JAIIL created a special vibe dodging construction cones, druggy dancers and other refuse to deliver this memorable set."