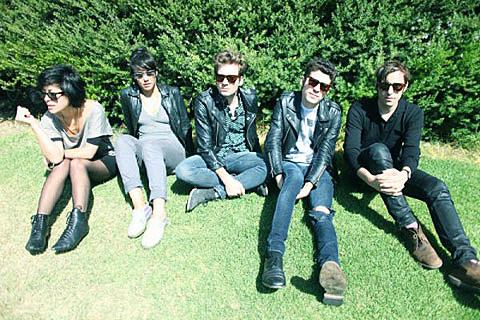 Back in June, we got the title-track/single from Crocodiles's forthcoming LP, Sleep Forever, due September 14th on Fat Possum. That's re-posted above, and with the release approaching, the band has booked a series of shows, including a New York date, set for Wednesday, September 22nd at Mercury Lounge. Tickets are on sale.

They also have a number of West Coast gigs preceding NYC, mainly around their L.A. homebase (where they have two free shows at the Echo). They'll be making visits to Chicago, Mexico, and, in the fall, the UK.

The record - part flower power, part roadhouse - clocks in at just over 35 minutes, and between eight-songs that means a lot of fuzzed-out krauty interludes. Live, the band's lead duo - Brandon Welchez and Charles Rowell - will play as a five-piece band, with drummer Alianna Kalaba, bassist Marco Gonzalez and keyboardist Robin Eisenberg filling out the group.

Their acid-trip video for "Sleep Forever" and all tour dates are below...