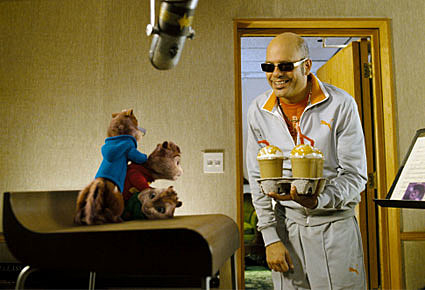 So, David Cross (see what he liked in 2007) has a part in the recently released CGI/live action family movie Alvin and the Chipmunks. It didn't take long before message boards and blogs were alight with Cross fans (and people who think money grows on trees) crying 'sell out!'. Of course, this silly backlash on its own certainly didn't merit a defensive move by Cross. However, a few weeks ago, Patton Oswalt (see what he liked in 2007) published a characteristically funny and insightful myspace blog. Like most of his blogs, it was a good read and nothing within it struck me as particularly provocative, but to Cross this blog contained a stinger:

Oddly enough, both Brian Posehn and I were offered the part of Ian, the agent. We both threw the script across the room in disgust. David Cross caught it.

These three sentences, coupled with a pre-existing backlash, provoked a whopping 5-part response from Cross which sets out to not only counter Patton, but to also address the petty whining of legions of disappointed Cross fans. For me, no explanation was needed; a person needs work. And to be honest, I found his 5 part response to be a mega-invaluable resource for learning what Cross has been up to these days.

But wait.... Patton ain't done. Via the Onion AV Club, Patton unleashed a counter-letter in response to David's treatise. That same day, Steve Hyden at the Onion had some strong, yet not altogether off-base, words on the subject. With message boards and commenters in full throttle, it looks like the argument is far from over. Who doesn't like cyclical arguments and flogging dead horses?