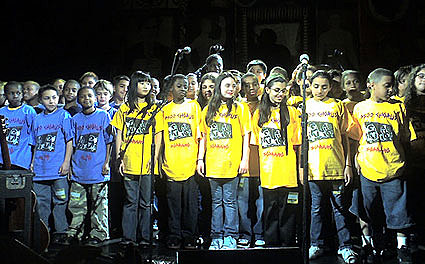 It's an ironclad rule of rock&roll that anything involving a children's chorus is a bad idea. From "You Can't Always Get What You Want" to the Clash's remake of "Career Opportunities," the results are usually mawkish at best and disastrous at worst.

But not last night, at Crowded House's show at Irving Plaza. The PS 22 Chorus, from an elementary school in northwest Staten Island, has made something of a name for itself by performing wonderful arrangements of contemporary pop hits, and has performed them with stars like Tori Amos. And last night they opened for Crowded House.

The kids came out and did a couple of songs on their own, under the direction of the teacher, Gregg Breinberg, and then Neil Finn came out, grinning from ear to ear and applauding, and the rest of the band joined him, and they did two more songs. The version of "Throw Your Arms Around Me" they did is beyond description -- it's a beautiful song to begin with, but the kids clearly love it and get it. [Riffs and Licks]

Last night was the last of three shows Crowded House played at Irving Plaza in NYC. More tour dates HERE. Video of the band playing with the PS 22 chorus, and the set list from night 2, below....

Crowded House & PS22 Chorus THROW YOUR ARMS AROUND ME

Encore 1:
World Where You Live
Love You Til The Day I Die
Weather With You

Encore 2:
When You Come (Only request granted)
Throw Your Arms Around Me (with opening act Don McGlashan singing a verse)
Four Seasons in One Day
----

and PS 22 posted this video earlier in the year...