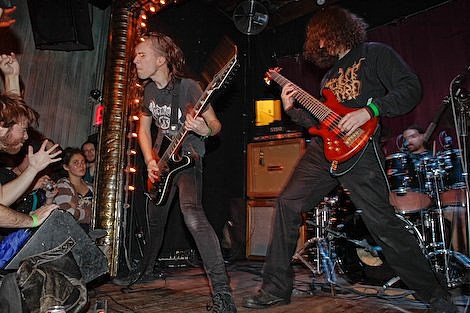 With a recent and triumphant show still etched in our memory, Krallice has scheduled another NYC show on Jan 10, 2009 at Knitting Factory with Crucifist, Ancient Wound, and Humanity Falls. Tickets are on sale.

Worth noting is the addition of Crucifist to the lineup who (originally discussed here) contains members of Odoruin and one Dan Lilker of Anthrax/Exit-13/Brutal Truth/Venomous Concept/SOD/Nuclear Assault/many others fame. Crucifist is on a brief east-coast jaunt that kicks off in Cleveland, does two nights in Pittsburgh before pounding their way to a final date in Boston. Full Crucifist dates are below. The band is celebrating the release of Demon-Haunted World, which dropped earlier this annum. Download FOUR tracks from that effort above.

Dan Lilker played with Brutal Truth last night (12/9), when they supported Municipal Waste along with Phobia and Cauldron at Gramercy. Pics from that show are forthcoming.

Both Krallice's Dimensional Breakthrough and Crucifist's Demon Haunted World are out now via Profound Lore. Cop them joints.

Full Crucifst dates and a couple vids of Krallice are below...