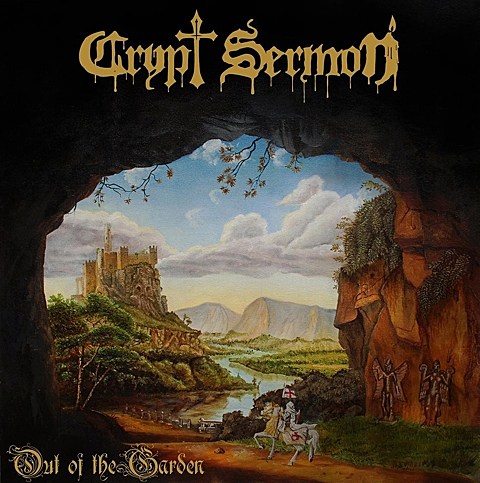 Philly doom band Crypt Sermon released their debut album, Out of the Garden, today (2/24) via Dark Descent Records. Joseph Schafer did a lengthy profile on them over at Invisible Oranges, and here's an excerpt about the new record:

Even though the Year of the Ram has barely begun, Out of the Garden has secured its place as an Album of the Year contender.

Crypt Sermon will not be saving any souls, but they might save something just as intangible: doom metal itself.

That doom metal needs saving is not obvious at first brush. The first of metal's myriad subgenres, doom metal has always carried crossover appeal and staying power first because it's the style of metal most indebted to blues and second because, even if only through Black Sabbath, doom gets some play on classic rock radio in middle America. 2014 proved particularly kind to doom: Yob made Rolling Stone's top 50 albums list (not metal albums, mind you), and Pallbearer mopped up industry accolades, for starters. What they have in common, is an emphasis on atmosphere, tone and sound design, sometimes at the expense of riffs, and riffs, as envisioned by Tony Iommi and Geezer Butler, are the core of doom--of metal--as a genre. Further, considering how easily the smallest amount of mainstream exposure turned great bands like Mastodon and Isis into the flashpoint for swarms of insufferable copycats, its easy to envision the next few years as a morass of tuneless plodding junk being sold as "doom."

The band told us how their melodic, Candlemass/Solitude Aeturnus-inspired style of doom was a reaction against "that whole stoner/sludge thing." And how none of them had played in a doom metal band, most interestingly, including singer Brooks Wilson:

"I've certainly spent most of my life singing in some manner," Wilson said. "But most of the time, I'd just be singing like folk and country music, but I've also been in screaming punk and hardcore bands and even metal bands for some time now, so that wasn't unfamiliar to me either, but I've never really tried or given much effort toward rock singing. It just wasn't on my agenda until I just one day turned to Steve and I was like, 'I can do that.'"

It may seem glib, but even in a record composed of such compelling instrumental performances, Wilson's vocals are the main selling point. in a key divergence from the epic doom records that inspired Crypt Sermon, Wilson sounds off like he's got a pair, to quote Full Metal Jacket. He gets the most he can out of his relatively gruff midrange, rather than straining for high notes he can't comfortably reach--that is to say, unlike many metal singers, Wilson has an actual sense of pitch, not just a good-for-metal sense of pitch. More importantly, he delivers his own lyrics with a great deal of conviction. To crib a term more suited for vintage rock and R&B, Wilson sings with soul, or at least with a sense of conviction.

So Crypt Sermon recorded their debut album armed with a jackhammer drummer, two world-class shredders, and a firehorse singer who can innovate a haunting song out of a folk classic in, by his own admission, seconds. That alone is not enough to change the doom game. The bands that Crypt Sermon is positioning itself in opposition to sport great vocalists and musicianship as well, but what sets Jansson, Wilson and company apart is a sense of deference to doom's origins, because as the oldest kind of metal, doom is also the subgenre that shares the most chromosomes with rock music, and that's by design.

...Even on their first album, Crypt Sermon is aiming for the history books. "Songwriting is absolutely key. It's the most important thing to me in any music, especially meta. I think there's a lot of doom--it lacks that," he said. "All of my favorite albums, all the classic records you grew up listening to, you still hear people talking about them. You still go back and listen to them because they have longevity because the songs are just so well-written and done. It's so important to focus on crafting and writing a great song."

And fortunately, Crypt Sermon have in fact written a great song. Seven of them actually, all of which make up the new album and can be streamed (via Stereogum) below...