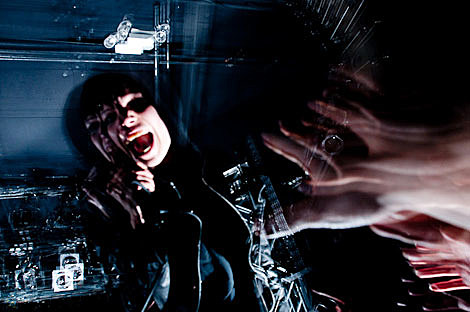 Crystal Castles were supposed to play a show at the Granada Theater in Dallas last night (4/14). According to the band's manager:

"After witnessing the CC soundcheck, the owner of the club was afraid that CC would "blow up the soundsystem" and the show was cancelled, after three hours of arguing."

A MESSAGE FROM THE GRANADA THEATER:

Let me start with a definition:
Pre-madonna: Pre-madonnas cannot help the way they are because their parents spoiled them and they are still developing their personalities. All a pre-madonna has to do is whine and their parents give them what they want.

Here's how our day went at the Granada on Tue:
Vega (Alan from Ghosthustler) opened for CC in Austin Monday night. At 5pm (3 hrs before doors) we received a call from CC that Vega could not be on the bill.

Vega had been approved by CC in advance for the bill. Early on Tue CC hired a light tech from Austin that is also a DJ to replace Vega.

CC could have communicated with Vega early in the day before they left Austin.

Vega was at the Granada waiting to soundcheck.

CC would not enter the building until Vega was gone from the premise.

Alan was super cool. No pre-madonna.

CC soundchecked at 6pm instead of at 4pm.

CC insists that "more woofers be brought in".

CC says they would rather cancel the show than possibly not have enough kick drum.

Granada begs that the show goes on.

Granada even offers to dismantle sub woofer stacks and place them in different places in the room.

Granada was willing to do anything to have the show go on.

CC waits until after 10pm to give final cancellation.

Why would any band crap on their fans like this?

Insecurity is a cancer. Love yourself. Love your sound guy and the system at the club you are playing.

Play the show. Then listen to your fans. If you don't like the sound at a club never go back to the club.

We've had every big band imaginable in every genre imaginable and had amazing shows.

Nobody has complained about our sound. This is totally out of left field.

The sound at Granada is amazing...and would have been if CC would have just got on stage and played.

Today, Granada is refunding ticket cost and entire service charge to each patron. No one cares for live music more than we do. We've put together an amazing room, staff and sound system.

We'll see you soon fellow music fans.
Mike Schoder and all the Staff at Granada.

This is not the first time Crystal Castles have been at the center of a controversy (and strangely last time also included a mention of 'Madonna').

Crystal Castles are playing the All Points West Festival in Jersey this summer.