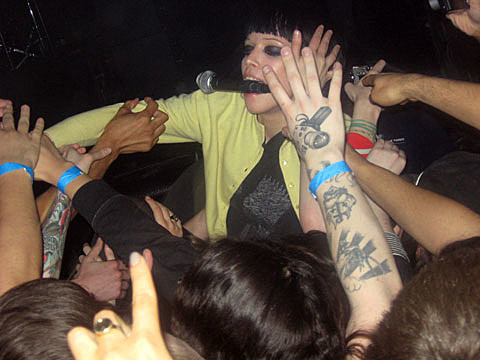 "Crystal Castles' new single "Doe Deer" will be released on Record Store Day on April 17th. The release will be limited to 500 copies worldwide as a 12-inch vinyl and will not be available digitally or on CD. The one-minute and 37 second song will be accompanied on the EP by songs recorded by the band in 2004: "Mother Knows Best", "Insectica" and "Seed"."

"Doe Deer" can be streamed in the video below. The track will appear on the band's new self-titled album (not to be confused with their first self-titled album) that is out in June. Tracklist below too. Above, you can grab two free band-approved, but unreleased remixes.

The above picture (more like it at Flickr) comes from last night's Crystal Castles/Pictureplane show at Irving Plaza. The band return to NYC as part of their HARD tour in August.