"We are also playing tomorrow night with Crystal Stilts, German Measles and The Mad Scene (Hamish from the Clean, Girl from Yo La Tengo)..." - Street Chant 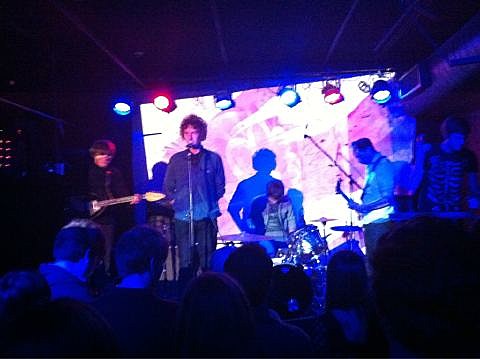 Crystal Stilts played Rock Shop on Friday (10/29), days after the release of their new Shake The Shackles 7" via Slumberland Records. Download the title track above and stream both tracks from that release, below.

Crystal Stilts seem to open for half of the indie legends that pass through town (The Vaselines, Dean Wareham playing Galaxie 500, Henry's Dress/Aislers Set, Comet Gain), and/or play with every notable current indie-pop band who are on tour too. They're also part of indie supergroup Cinema Red & Blue which prominently features Comet Gain's David Feck, but also "employs the services of Amy Linton, Hamish Kilgour and Gary Olson." It's not a big surprise then that their recent Rock Shop show with German Measles, The Surprisers and The Mad Scene was equally indie-star studded, though it was the Mad Scene that consisted of regular member and New Zealander/Brooklynite Hamish Kilgour of The Clean along with Georgia Hubley of Yo La Tengo, Amy Linton of Aislers Set, and Gary Olson of Ladybug Transistor. New Zealand band Street Chant, who were in for CMJ, also played some songs at the show.

If you missed Crystal Stilts over the weekend, you won't have long to wait to catch them again, and for FREE; the Brooklyn band will play a free show at Brooklyn Bowl on 11/14. It's part of the venue's "Local by Local" series of shows. 21+. 8pm show.

Meanwhile, Cinema Red & Blue released their debut LP last month on What's Your Rupture. Crystal Stilts have a new LP on the way as well and though very few details have been released, look for it in early 2011. Until then, tide yourself over by checking out the new 7" tracks streaming below.