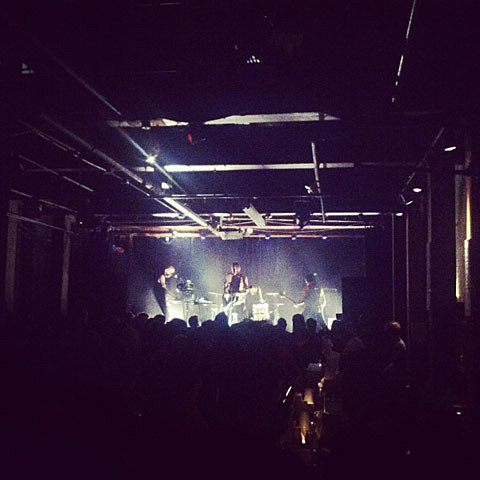 Friday evening at Public Assembly (9/7) saw a motley crew of performances to celebrate the
release of Cult of Youth's new album, Love Will Prevail, out now via Sacred Bones.

At the start of the night, crusty noisemakers Zatsuon pierced through the sparse crowd with a blisteringly short set that involved a lot of caterwauling, a lot of blown out bass and a lot of thrashing about (though almost entirely by the band's frontman who violently threw himself into and out of the less-than-willing crowd on more than one occasion). Polarizing the small crowd, the open-minded stayed throughout their set while the rest-- no doubt Cult of Youth fans expecting something less aurally assaulting--retreated to the back of the venue. Summed up well by a small and very concerned-looking concertgoer after Zatsuon's frontman jumped from the stage into the crowd, "Do you know if all the other bands are going to be like this? I don't want to get hurt."

Whether or not she preferred what Pink Reason brought to the stage next is uncertain, but they did set the concert on a less sinister path--at least on the surface. The set hearkened to a time of a laid-back punk affectation, less encumbered by fashion statements and more about the familiar devil-may-care attitude. Jangling, bluesy at times, Pink Reason were, above all, quite fun to watch--a far cry from the hollow alienation that characterized the band's earlier "shitgaze" records. Someone familiar with the band's discography might even say that Pink Reason's performance spoke to a newfound control over the uninhibited anomie of their earlier work; a sign that the band is not less nihilistic these days, but more at ease with that nihilism. True to that, frontman Kevin DeBroux introduced one of his upbeat, pogo-ready punk songs with, "This song is about the American prison system...I just wanna say: fucking kill cops." 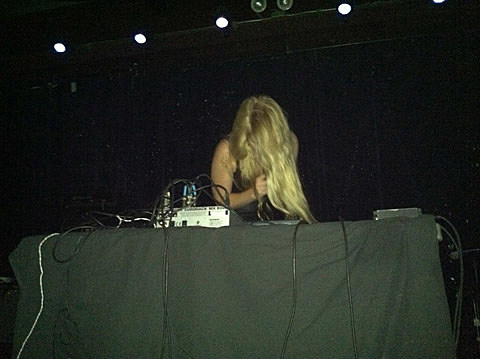 Though it may have been an odd choice to add noise project Pharmakon to the bill, it proved an awesome one. Easily the most unexpected and powerful performance of the night, solo noise artist Margaret Chardiet commanded the attention of the of the audience more than any other. Ghoulishly swaying back and forth with her long blonde hair concealing her face, her distorted, reverberating vocals cascaded through harsh industrial beats. It was less a performance and more a display of demonic possession, the spilling over of a rage so pure, powerful and misanthropic that it seized total control over all.

It was as if Pharmakon delivered the opening liturgy for headliners Cult of Youth who did, in fact, preside over the show much like a priest at the altar. By the time they went on, the stage was smoky, the smell of incense pervading through the dark room. The bands raw pastiche of rugged Americana, neo-folk and exotic psychedelia are haunting enough alone, but coupled with their spectral appearance on stage -- lit only from below, shadows casting into the hollows of each musician's face -- one could believe they were quite literally channeling the spirits of long-dead saints, criminals and poets. Though now short the disturbingly beautiful violin arrangements of Christiana Key, Cult of Youth proved no worse for wear and the songs played from their new album may very well be their richest yet.

Cult of Youth head out on tour in early October, including a stop at FFF Fest in Austin. Tour dates are below.