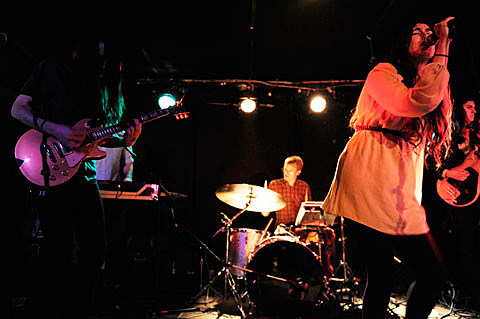 Cults play The Independent in San Francisco on Thursday, a prequel to their appearance at Coachella this weekend and the end of the road for a tour with Magic Kids that saw them play Mercury Lounge together and saw Cults play Knitting Factory without Magic Kids whose van went kaput.

After a couple months away from the road, Cults will head back on another East Coast trek where the band play two more NYC dates: at The Box on June 8th and Music Hall Of Williamsburg on June 9th. Details on the 6/8 show at The Box are sketchy at best (possibly not open to the public?), but tickets for the MHoW show go on sale Friday 4/15 at noon.

The tour also includes a Canadian stint where they'll appear at NXNE in Toronto. There the band will join as many as 650 others in playing the eight day festival. The announced also include Deerhoof, Dodos, Bouncing Souls, Hot Water Music, and Art Brut. Full lineup is forthcoming.

All Cults dates and a stream of the new track "You Know What I Mean" below.