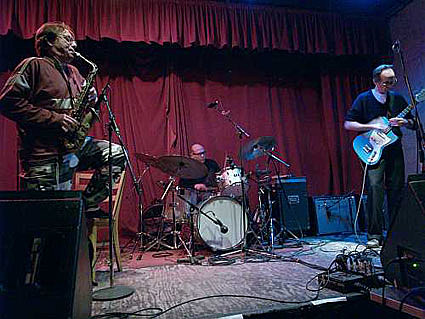 CULTURAL EMERGENCY
Musicians and Friends:
It is time to Claim what is our Right!

WE MUST DEMAND:
AN ADEQUATE, AFFORDABLE SPACE, CENTRALLY LOCATED IN THE LES!
TONIC IS BEING HANDED OVER TO THE REALTORS.

WE ARE MAKING AN APPREAL TO THE CITY, TO EITHER GIVE US THIS SPACE OR ONE COMPARABLE IN SIZE FOR THE USE OF AVANTJAZZ/NEW MUSIC/INDIE COMMUNITY.

WE CAN NOT LOSE SUCH AN IMPORTANT HOME!
YOUR PRESENCE - YOUR MUSIC- YOUR VOICE – YOUR ART - IS ESSENTIAL.

SHOW THE CITY YOU CARE ABOUT WHAT IS HAPPENING.

STOP THE LOSS OF IMPORTANT VENUES, ONE BY ONE FORCED TO CLOSE BY RENT INCREASES AT AN ALARMING RATE.

STOP THE DESTRUCTION OF THE LES AS A CENTER OF DIVERSE & VARIED & UNIQUE CULTURE.
Tonic is scheduled to close on Friday, April 13th, 2007.

The following day, we will gather to fight the eviction of this crucial venue, the diminishment of our livelihoods, and the destruction of our culture by peacefully resisting. Please join us.

For the last nine years Tonic has been at the center of NYC experimental music. When the tsunami of rent increases and mal- development engulfing the LES forces its closure, NYC will have lost the last avant-jazz/indie/new music club in Manhattan with a capacity over 90. A vibrant community of musicians and fans worked for years to maintain Tonic -- raising over 100,000 dollars through benefit concerts and donations to pay off debt, fund repairs, buy a sound system, and keep the club open in devastating times such as following 9/11/01.

We’re taking action now to dramatize the market failure of which Tonic’s closing is a symptom, and to ask that the city save this home for us or provide a minimum 200 capacity, centrally located venue for experimental jazz, indie, and new music.

We want for ourselves and the communities around us the right to stay around long enough to enjoy the culture we’ve created, not harassment and a bum’s rush into eviction the minute real estate decides we’ve made the neighborhood ‘safe’ and ‘cultured’ enough for them to cash in.

This is where we tell the landlords, developers, and the city:
Enough. Genucht. Basta ya!

Coming on the heels of the closing of CBGB's, Sin-e, Fez, The Continental, and numerous other varied downtown venues, the closing of Tonic represents the shutting down of NYC's most important live music experimental jazz, indie, and new music scene.

This wave of live music space closings constitutes a market failure.
The downsized or geographically marginal venues arising in the wake of the established club closings are not generating enough to maintain the economic viability of this scene. If there is not immediate and sufficient PUBLIC INTERVENTION, either in the form of limiting rents, or supplying alternate space and funding - or both - New York City will lose an essential part of its heritage, culture, and economy.

“My band plays some of the biggest festivals in Europe...Meanwhile there’s only one club I can play in New York and it’s about to close.”
Steven Bernstein, Trumpet player and leader of Sex Mob and the Millennial Territory Orchestra (NY Times)

According to Patricia Nicholson Parker, organizer of the Vision
Festival:
“We have come together to say we deserve a space and in essence, we have already paid for our space. Musicians contribute to the economy of this city every day with world class performances. In the case of Tonic, many musicians came together and invested in the space.
Through benefits and organizing they raised significant sums of money (100+ grand) for the venue, Tonic. The city needs to acknowledge this. It is good for the city and good for the artists and their audiences that the city make available a musician-friendly community club/space which holds up to 200 audience members. It is important that it not be in the outer boroughs but be centrally located in the LES where this serious alternative music has been birthed and where it can be easily accessed by audiences.”