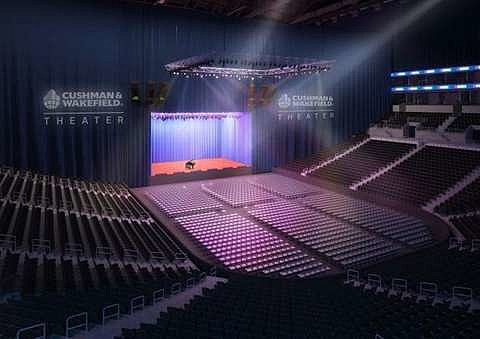 R&B crooner and frequent Real Time with Bill Maher guest John Legend, whose 2010 album, Wake Up!, was a collaboration with The Roots and who we recently spotted checking out Frank Ocean at Terminal 5, will be the first artist to play the Cushman & Wakefield Theater, an "intimate theater" within the Barclays Center complex, on October 29. Intimate compared to Barclays Arena at least, the theater seats 3500 - 6000 people. Tickets to John Legend's show go on sale Friday (8/17) at noon.

That show is with UK singer Lianne La Havas, who made BBC's 'Sound of 2012' list and opened for Bon Iver in Chicago (and other dates) in 2011. She also plays her own NYC show on September 11 at Bowery Ballroom (tickets).

The Cushman & Wakefield Theater show is of many dates on John Legend's upcoming fall tour, which also hits the NYC area on October 25 at Wellmont Theatre with Stacy Barthe. Tickets for that show go on sale Friday (8/17) at noon. Tickets for the shows will also be available through Tickets-for-Charity, which will donate $1 from each ticket sold to The Show Me Campaign.

John will be using his fall tour to preview cuts from his new Kanye West-produced album, Love in the Future, which is out in the near future, actual release date TBD. You can watch a short video of John announcing the tour and talking about the album at the bottom of this post.

A list of all John Legend tour dates and that video are below.