"much love to our friends in the desert (and Danny DeVito) for making coachella a truly memorable one for us! Epic crowd, Epic sunshine. x" - Cut Copy 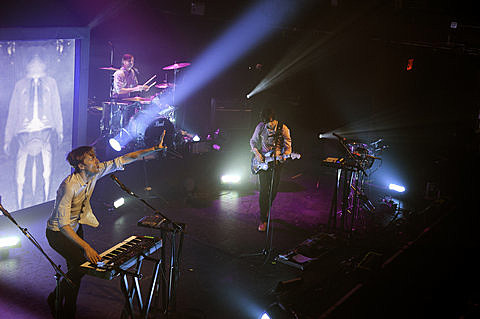 Cut Copy are currently finishing up a tour with Holy Ghost! that had them at Coachella Friday night. Check out videos of the crazy dance party that the Australian band brought to the California desert, below. Check out pictures of other bands who played Coachella that day, HERE.

Cut Copy's tour came to Terminal 5 in NYC three times in a row earlier in the month, and Cut Copy will return to NYC this August to, like Animal Collective, play a headlining show at the Prospect Park bandshell. Tickets for the August 11th 'Celebrate Brooklyn' benefit go on AmEx presale Wednesday at noon, and then regular sale on Friday. Foster the People, who also tour through NYC in June, open the outdoor show.

The new Brooklyn gig comes a day before a show Cut Copy are playing Arizona, and almost a month after they visit North America to, like Animal Collective, play the Pitchfork Festival in Chicago. Most of their other announced dates are in Europe at the moment. They are all listed below...