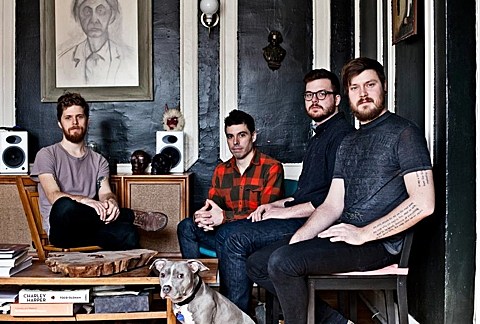 Chicago's Cut Teeth formed back in 2011 by Matt Jordan of the great Stay Ahead of the Weather (one of Evan Weiss' many bands), Dustin Currier of the recently-reunited Felix Culpa, Dan Yingling of '90s/early '00s screamo band Forstella Ford (and a few others), and Kyle Johns of '00s emo band Monday's Hero. They self-released their debut EP, Televandalism, the following year, and it was later re-released by Topshelf who is now putting out their first full length, Night Years, on October 28 (pre-order). We've got the premiere of its brand new single, "Christmas on Easter Island," a post-hardcore ripper with some shades of Murder City Devils and Hot Snakes. Check it out below.

Cut Teeth's only upcoming show at the moment is the Chicago stop of the Felix Culpa / Rescuer / Aviator tour happening October 17 at the Beat Kitchen (tickets). That tour hits NYC a few days later for the free No Sleep CMJ showcase (co-presented by BV) which includes other bands like Foreign Tongues who put out a new video this morning.