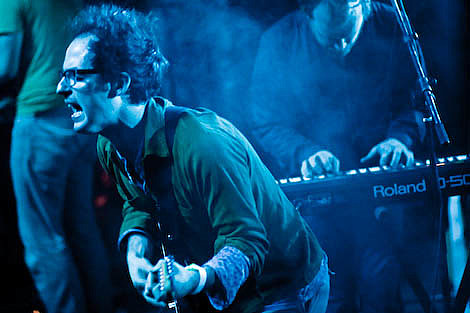 Clap Your Hands Say Yeah are apparently taking a (possibly permanent?) "break" after the previously-announced February 13th show at BAM. The rumor is that they've nixed plans to go back into the studio, and that they have no further dates scheduled. I'm not saying I'm 100% positive this is the last we'll see of them, but it seems likely the show will be the last chance to see them for a very long time, if not ever. Chairlift opens, and tickets are still on sale.

In the meantime, CYHSY's Tyler and Robbie have been keeping busy with Uninhabitable Mansions, who have a show coming up February 27th at Union Hall. CYHSY's drummer Sean continues to play Axl Rose in the Gn'R cover band Mr. Browstone. Their next gig is February 7th at Starland Ballroom in NJ. Alec Ounsworth's latest pastime is being a father.

After BAM, Chairlift are going on a March tour with Yacht, and will be visiting the west coast in April with Sebastien Tellier. Though not confirmed, I'd say the March tour makes it look like they'll be at SXSW, and the April dates have them coming awfully close to Coachella. All dates below...