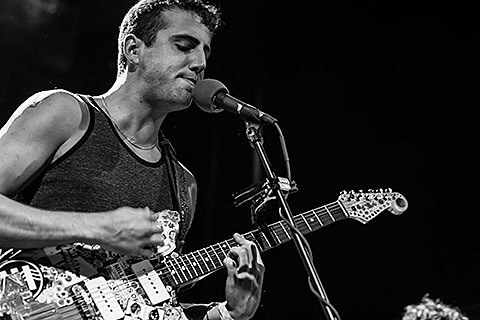 Cymbals Eat Guitars just wrapped up three nights in NYC on their ongoing tour with Bob Mould, the final three of six total NYC shows in support of their great new album, LOSE. After the tour with Bob ends, they'll stay on the road, this time supporting Brand New on their southern US dates. Following their return home, they'll go a short headlining Northeast run in December, including another NYC gig on December 12 at Knitting Factory. Tickets for that show go on sale Friday (9/19) at 10 AM. Updated dates are listed below.

We already posted pictures of the first night of Cymbals Eat Guitars and Bob Mould's NYC run, and now Klaus Kinski's got a review of the third night, which happened at Music Hall of Williamsburg this past Saturday (9/13). Take it away Klaus.

On Saturday September 13th, indie rock God Bob Mould played an absolutely crushing show at Brooklyn's Music Hall of Williamsburg and, holy smokes, I'm still reeling. This show, as has been the case for most of his current tour, was kicked off by the great Cymbals Eat Guitars. I saw Cymbals a few years ago at MHOW opening for godknowswho. At that time, the tunes were a little less polished, but I liked them regardless. This time around, Joseph D'Agostino and his posse delivered an extremely tight and frenetic set. The highlight of their set for me had to be closer "Laramie" which blended melody, harmony, and crushing heaviness so well that I wanted to throw and/or punch something. Don't miss that headlining gig at Knitting Factory they've got coming up.

After a brief intermission, Bob and company hit the stage and unleashed a 23-song set that covered everything from Husker Du, to Sugar, to solo Bob. Backed by the great Jon "For Better Or For" Wurster (Superchunk, The Mountain Goats, Scharpling and Wurster) on drums and Jason "Father Guido" Narducy (Superchunk, Boston Spaceships, Split Single) on bass, you could not have asked for a louder and more technically solid set. As far as drummers go, you really can't get more consistent and reliable than Jon Wurster. He's not as technical as, say, Buddy Rich or Mike Portnoy, but he hits hard and he hits true and he never misses a beat. He's more like a, say, Kenny Aronoff type player. A flippin' machine. Narducy also delivers consistency to the mix as well. Besides being a fantastic bass player, he's also a killer back-up vocalist and is capable of bouncing and twirling around the stage without hitting a single clam-note (unlike, say, Greg Demos from GBV). And Bob Mould... forget it. Equipped with a Marshall half-stack, a Fender strat, and a shitload of volume at his disposal, the trio of players combined produced one of the most incendiary rocks sets I have seen in ages.

The show kicked off with the great Husker Du jam "Flip Your Wig" and proceeded through a ripper of a setlist featuring songs like "Hate Paper Doll," "Kid With Crooked Face," and "I Apologize" without ever losing one microspeck of energy. As a matter of fact, early into the set Bob asked the sound guy to turn everything up. The show closed with his cover of "Love is All Around" which is the theme song to the "Mary Tyler Moore Show" and that tied the show up with a neat little bow. I can't believe this was my first time seeing Bob live and regret the dozens of times I could have seen him in the past. From now on, I will see him wherever he plays within a 40 mile radius of wherever my dumb body happens to be.

In case you missed it, Bob appeared on Marc Maron's WTF podcast. Check it out!