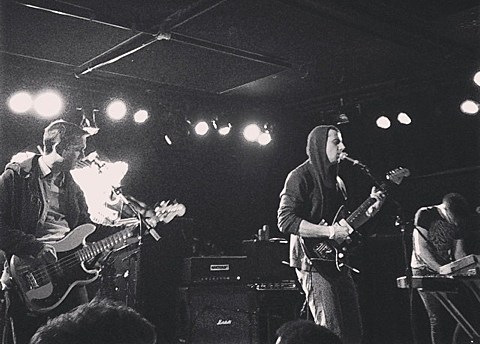 Cymbals Eat Guitars wrapped up their tour with Alex G (more on him here) over the weekend (unfortunately they had to cancel their Albany show though), hitting NYC on Friday (12/12) at Knitting Factory. It was the seventh NYC show they played this year in support of their great third album, LOSE, which takes the band in exciting new directions. They were great opening for Bob Mould in September, but seeing them headline on Friday to a packed crowd was really the way you want to experience these songs. Awesome show.

As discussed, CEG are touring with This Will Destroy You in 2015 (they're not on TWDY's NYC shows though), but before that they'll play NYC for yet another time in 2014. They've just added a show happening on December 30 at Glasslands, which will be the venue's second to last show before closing. Keepaway, Mon Khmer and Air Waves open. Tickets are on sale now.

Updated dates are listed, with the video for "Warning" from LOSE, below...