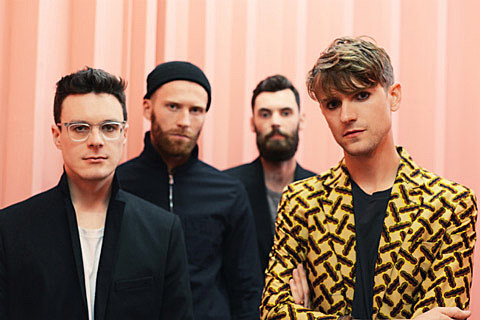 The video is a portrait of London over 24 hours, stripped back to its essential rhythms of work, leisure and the movement between the two. The song seemed, to me, to inhabit that grey area between four in the morning and dawn, when you have people going home from the night before and people getting up for work, sharing the same night bus.

So the video keeps ending up at that point. The idea being that however much you may try to escape it, city life keeps you hostage to very pronounced cycles of rhythm and routine. The video is an attempt to distill that into a psychedelia of: ticket halls, private gyms, gigs and Wetherspoons.

CYMBALS were last on this continent in March, surrounding appearances at SXSW. The band will return next month, kicking off the tour with two NYC shows: Pianos on July 18 with Austin's Ume, and Midnight High (tickets); and then July 19 at Glasslands with Future Punx and Donovan Blanc (tickets).

All dates are listed, along with "The End" video, below...