Cynic at Irving Plaza in 2009 (more by Justina Villanueva) 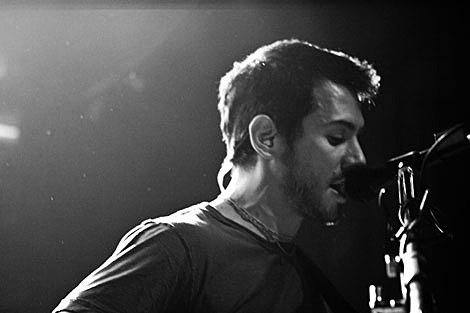 Floridan progressive metallers Cynic are set to tour later this year in two separate blocks. The first, with Lesser Key and We Are the City along for the ride, will begin in Vancouver on July 6 and wind down the West Coast, ending in Los Angeles on July 12. The second heads east, trading in We Are the City for The Reign of Kindo, and kicks off August 7 in Philadelphia. The East Coast leg comes to a hault in New York at Gramercy Theater on August 12. Tickets are not on sale yet but should be soon via Ticketmaster. All dates are listed below.

Cynic is touring in support of their third album, Kindly Bent Free to Us. Released last February, Kindly Bent showcased a return to the knottier prog metal of their earlier days without sacrificing the pop sensibilities and adherence to hooks the mature band grew into following their 2006 reformation. Now down to a trio, vocalist/guitarist Paul Masvidal, bassist Sean Malone, and drummer Sean Reinert exhibit an instrumental interplay and understanding present only in players who have spent years together. And that they have.

Formed in 1987, Cynic began life as a thrasher with death metal deviations, cutting a string of successful demos that upped the ante when it came to embryonic death metal's burgeoning fascination with technical progression. Original members Masvidal and Reinert would soon find their way into Death, playing on the classic Human album from 1991. Masvidal would also go to work for fellow progenitors Master, appearing on On the Seventh Day God Created... Master that same year. But, Cynic was always a primary concern. The band continued to grow, adding low-end wiz Sean Malone, and soon signed with Roadrunner Records for 1993's Focus. Considered now to be one of the great progressive metal albums, Focus was pretty polarizing in its day, due to its frequent fusion tangents and a call/response consisting of death growls and a vocoder. Cynic would split in '94 with members following various paths. Then, after a series of well-received reunion shows, the group finally returned to the studio for their sophomore album, 2008's Traced in Air. It was an older, wiser, more meditative Cynic. Yet, the spirit was Cynic all the same.

All of the dates are listed, along with selections from Cynic's varied discography, below...