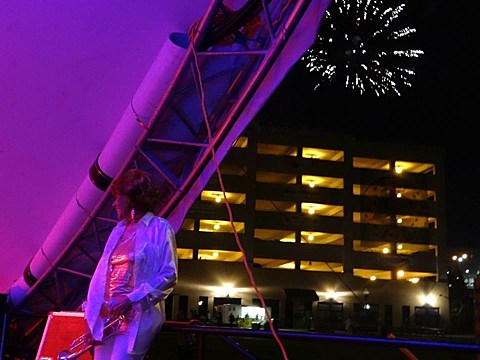 She was the voice that commanded us to "get up and dance to the music," and the woman who Sly Stone put "on the throne" in the Family Stone hit "Dance to the Music."

But that voice has been quieted with the death of Sly and the Family Stone trumpeter, vocalist and co-founder Cynthia Robinson on Monday (Nov. 23) at the age of 69, according to her Facebook page.

...Robinson joined Stone -- who dubbed her "one of the best trumpeters in the world" -- in his Sly and the Stoners band in 1966 and stayed on board as he crafted the pop/rock/R&B synthesis that became the Family Stone. After the group's dissolution in 1975 she went on to play with bassist Larry Graham's Graham Central Station and also worked with George Clinton, Prince and as part of Sinbad's Aruba Summer Soul Festival. Since 2006 she's been part of the Family Stone with Martini and drummer Gregg Errico. The group also features her daughter with Sly Stone, Sylvette Phunne Stone, a singer and multi-instrumentalist in her own right. (Robinson had one other daughter, Laura Marie). [Billboard]

Sad news today: Cynthia Robinson of legendary soul/funk band Sly & the Family Stone has passed away. She was 69, and the cause was cancer.