Note: The below picture of D. Charles Speer's is not anatomically accurate. 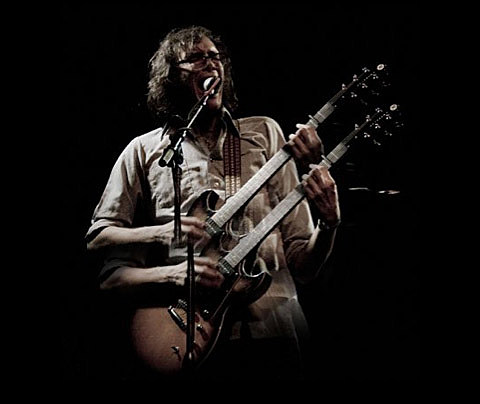 D. Charles Speer kicked off a solo tour last night (March 22) at Bruar Falls that continues tonight in Philadelphia with a show at Kung Fu Necktie. The solo dates (below) are in celebration of Speer's new "traditional Greek" solo record Arghiledes out now on Thrill Jockey.

"'Arghiledes' is a brilliant homage to Greek Rebetiko music of the early 20th century by No Neck Blues Band's David Shuford aka D. Charles Speer. It's his 2nd solo LP under this moniker and a deeply researched, beautifully executed effort replete with in depth sleeve notes and paste-on cover. Coming from a Blues playing American of Greek descent, the project reflects the syncretic nature of Rebetiko music, itself made up of the many disparate elements which formed Greek urban folk music (European music, Greek Orthodox ecclestiastical chant, Byzantine music and the modal traditions of Ottoman art music and café music) of this era." [SKVOT Pop]

Watch/listen to Speer playing "Markos's Cave" from the solo album below.

After playing those East Coast dates through the beginning of April, Speer will link back up with his band The Helix to prep for a pair of NYC shows: 4/16 supporting Come at The Bell House (tickets), and 4/21 with Endless Boogie at Glasslands (tickets).

Just four days before the Bell House show, D. Charles Speer & The Helix will welcome their new LP Leaving the Commonwealth via Thrill Jockey. You can download the lead track "Freddie's Lapels" above and check out a live video of the band performing "Razorbacked" below with all tour dates...