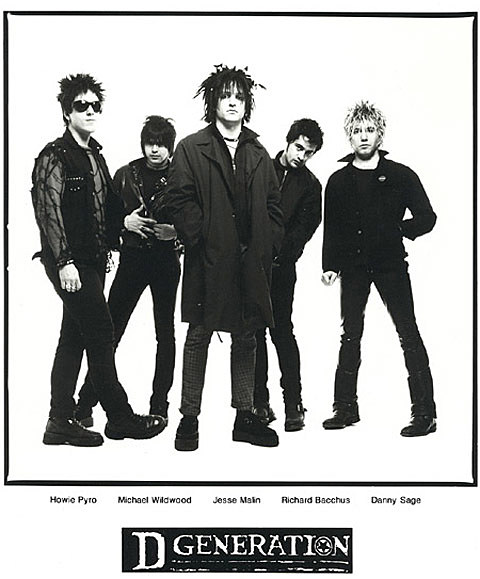 "While groups such as the Strokes and the White Stripes get most of the credit for spearheading the garage rock revival movement of the early 21st century, there were several similarly styled bands of the mid- to late- '90s that preceded the aforementioned acts (with far less commercial success and press), such as D Generation. Formed during 1991 in New York City, the band automatically turned a blind eye towards the burgeoning Seattle movement, as their look and sound was straight out of NYC circa the early '70s, when trashy glam bands like the New York Dolls ruled the scene, and such punk bands as the Ramones and the Dead Boys were about to crash the party. Originally comprised of Jesse Malin (vocals), Richard "The Atomic Elf" Bacchus (guitar), Georgie Seville (guitar), Howie Pyro (bass), and Belvy K (drums), both Seville and aK would exit soon after -- replaced with Danny Sage and Michael Wildwood, respectively." -[allmusic]

D Generation (Jessie, Howie, Michael, Danny and Richard) are back and will play Irving Plaza on on 9/17 and the Troubadour in LA on 9/24 (with Prima Donna and Biters). Both shows are on sale (click the links). More shows might be announced.

Jesse Malin meanwhile is on tour with Alejandro Escovedo. Tickets are still on sale for their April 30th show at the Bell House and May 6th show at Maxwell's.

Though broken up since 1999, D Generation did reunite previously, in 2008 for a 3-song set at the John Varvatos store opening. A video from that, and others, below...