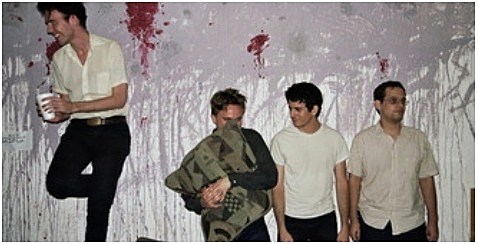 Tampa garage rockers Dads share members with Merchandise (Carson Cox and David Vassalotti) and are also regulars on the same underground scene that Merchandise came from before they began extensively touring decent-sized venues across North America. Dads are about to release a new 7", Invisible Blouse, next week (7/9) via Brooklyn's Wharf Cat Records. You can stream the rowdy title track from that 7" below. They have no tour scheduled at the moment.

Meanwhile, there's also a NJ duo named Dads, who have a new EP, Pretty Good, coming out on August 6 via 6131 (you can stream a track at the AV Club). Though a bit too '04 MTV-emo for our tastes, they have an ongoing tour with Ann Arbor shoegazers Pity Sex, whose great debut LP was recently released, and that tour hits Brooklyn on July 20 at Suburbia Death by Audio. Also on that show (and others) is The World Is... and Daylight.

UPDATE: As a commenter pointed out, the July 20 show has been moved to Death by Audio.

And just to keep things a little more confusing, there's a Chicago band called My Dad, who we recently caught in their hometown. Check out pictures on BV Chicago.

All Dads (NJ) dates are listed, along with a stream of the recent Dads (Tampa) single, below...