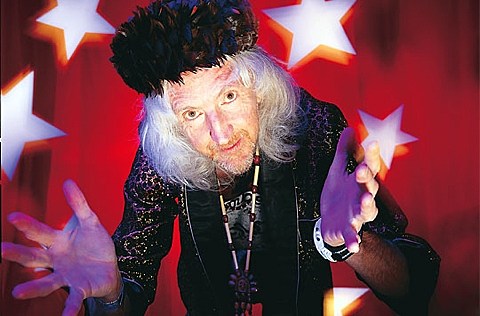 And so dada Ali, bert camembert, the dingo Virgin, divided alien and his other 12 selves prepare to pass up the oily way and back to the planet of love. And I rejoice and give thanks," he wrote. "Thanks to you dear dear daevid for introducing me to my family of magick brothers and mystic sisters, for revealing the mysteries, you were the master builder but now have made us all the master builders. As the eternal wheel turns we will continue your message of love and pass it around. We are all one, we are all gong. Rest well my friend, float off on our ocean of love. The gong vibration will forever sound and its vibration will always lift and enhance. You have left such a beautiful legacy and we will make sure it forever shines in our children and their children. Now is the happiest time of yr life. Blessed be.

Prog/psych legend Daevid Allen has passed away at 77 years old, as confirmed by the above message posted to his son Orlando's Facebook page (via Guardian). He announced in February that he had six months to live, after the cancer he was previously treated for spread to his lungs.

Daevid formed the Canterbury Scene prog pioneers Soft Machine in 1966 with Robert Wyatt, Kevin Ayers (who died in 2013) and Mike Ratledge, though he left before the release of their first album. Following his departure, he formed the more psych/space-leaning band Gong, which he fronted (besides intermittent breakups) up through his death. Their last album was 2014's I See You. Throughout this career he also put out numerous solo albums, and was a member of other groups including University of Errors, an early incarnation of Bill Laswell's band Material (known as New York Gong when Daevid was in it), and more.

Rest in peace Daevid. You'll be missed and your contributions to music won't be forgotten.

Listen to some Gong classics below...