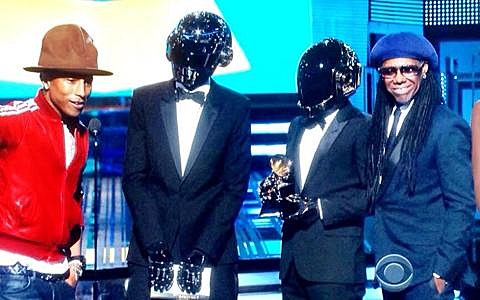 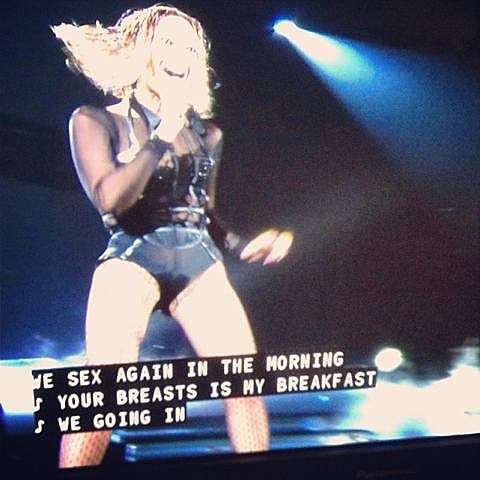 Daft Punk just cleaned up at the 56th Grammy Awards winning five awards (everything they were nominated for) including Record of the Year and Best Pop Duo/Group Performance for "Get Lucky," plus Album of the Year and Best Dance/Electronica Album (beating Disclosure), plus Best Engineered Album, Non-Classical.

Daft Punk's much-hyped live performance with Pharrell (whose hat has joined twitter), Nile Rodgers and Stevie Wonder didn't have the French duo doing that much themselves but the "Get Lucky" performance worked in Chic's "Le Freak," "Harder, Better, Faster, Stronger" and Wonder's "Another Star." Steven Tyler, who later joined an equally le freaky looking Smokey Robinson on stage to give Daft Punk one of their awards, was dancing up a storm.

Lorde, who performed early in the telecast, won Song of the Year and Best Pop Solo Performance (beating Justin Timberlake and others) for "Royals."

Another win that definitely reminded us it's 2014 came when Paul McCartney took Best Rock Song for "Cut Me Some Slack," his collaboration with Dave Grohl. The song is from Grohl's Sound City documentary, which also won for Best Compilation Soundtrack for Visual Media.

Paul performed with Ringo Starr (who also performed on his own), and also won for Best Boxed or Limited Edition Package for "Wings Over America (Deluxe Edition)." Grohl performed with Queens of the Stone Age, Nine Inch Nails, and Fleetwood Mac's Lindsey Buckingham during the closing performance... which was cut short on TV. We definitely weren't happy about that, and neither was Trent Reznor.

Rap awards Macklemore didn't win: Best Rap/Sung Collaboration which went to Jay Z & Justin Timberlake's "Holy Grail." Justin Timberlake (who also won Best R&B Song for "Pusher Love Girl") wasn't there to accept the award, but Jay Z gave a speech that included him saying, "I wanna tell Blue Ivy, look, daddy has a gold sippy cup for you!" Jay also kicked off the performances for the evening with his wife Beyonce, who played "Drunk In Love" (see screenshot from that performance above).

Kendrick Lamar didn't have much luck winning (neither did Kanye which should hopefully make for a good rant soon), but he did well performing live despite being paired with Imagine Dragons.

The commercials were filled with music as well. One very notable example of that was the Pepsi Grammys Halftime commercial which had athletes playing the music and acting like Daft Punk, Kanye, Miley Cyrus and more. Sonos also debuted a commercial featuring a clip of Karen O covering Bob Marley, which we premiered the full song of earlier in the day.