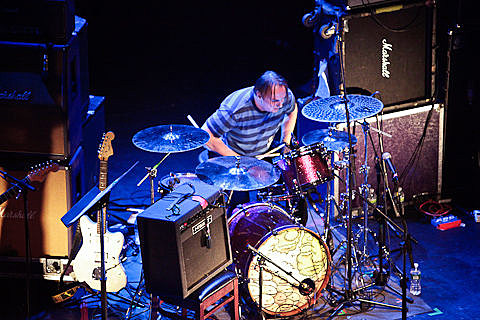 Singing with the Melvins. It's my dream, and apparently the wish of a young School of Rock student in Los Angeles who sang while Dale Crover played drums, covering the band's "Hooch" from Houdini. Check out the cover below, a must see for fans of Melvins.

The band recently played a New Year's Eve show with Redd Kross in their native Los Angeles where they had copies of show-only 12"s for sale, which included a cover of "Female Trouble" by Divine from the 1974 John Waters classic of the same name. Check that, and the School of Rock video, below.

Meanwhile, Melvins are always conjuring up new vinyl and the latest addition to that pile comes in the form of a 13-part Amphetamine Reptile split 12" series. This baker's dozen will feature appearances from names like Negative Approach, Off!, Butthole Surfers, and more, in addition to the recently surfaced Mudhoney and Fucked Up splits. Look for them "hopefully next week."

Taylor sings Hooch with Dale Crover of The Melvins