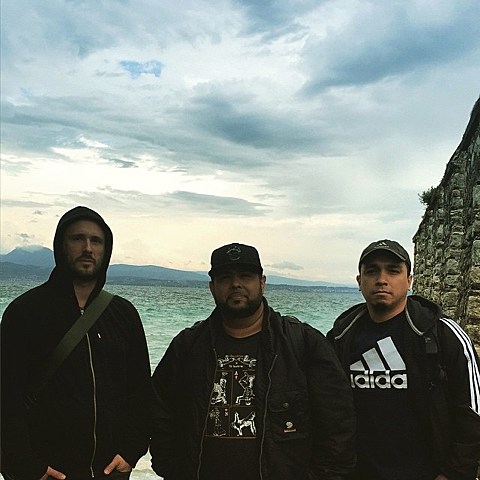 The short answer? I just missed the noise.

I started playing a few Dälek songs on the iconAclass European tour in 2013 and it just sparked that love for that noise and heaviness again. I had a good conversation with Oktopus about it all in mid 2014, and though he didn't want to pursue it, he was cool with the fact that I wanted to head out on the road as Dälek again. It kind of took off quickly after that. I asked rEk if he'd be interested in re-joining as the DJ. rEk was the original DJ in Dälek; he was out there grinding with me when we were sleeping on people's floors, playing basement shows for gas money. He came out on our first European tour opening for The Lapse in 1999. He never got to experience the "good times" with Dälek, when we got luxuries like our own beds to sleep in!

With the DJ secured, I told former Mikey Manteca, who I had started Fill Jackson Heights with, my plans and that I had thought about asking him to rejoin. I thought he wouldn't be interested because he had recently started a brewery called Secret Engine. Thankfully I was wrong. Now, after just a few months, we got some new joints finished and a month-long EU tour ahead of us. [Noisey]

Industrial hip hop project Dalek quietly went on hiatus not long after their 2009 album, Gutter Tactics, but now they're back in action with live shows and new music. Their first show back was this past April at Over the Eight in Brooklyn, and they'll play here again on July 17 at Saint Vitus with Cleanteeth and Final Boss. Tickets are on sale now.

Dalek's initial run had them collaborating with Justin Broadrick, touring with Russian Circles and Young Widows, touring with Tomahawk and the Melvins, and more.

Watch the video for their new 2015 single "Masked Laughter (Nothing's Left)" below...